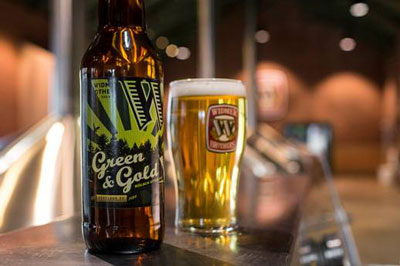 PORTLAND, OR —Widmer Brothers Brewing and the Timbers Army have teamed up to brew Green & Gold K├Âlsch, a limited-edition beer for the 2013 Portland Timbers season. The new beer will be available throughout the Portland area, and in select markets in Oregon and Southwest Washington, beginning on March 3, opening day for this year’s Portland Timbers season.

Green & Gold K├Âlsch is the creation of longtime Timbers Army member Abram Goldman-Armstrong, who won the “Full 90” category of the 2012 Timbers Army Homebrew Competition with this recipe. Goldman-Armstrong has been brewing variations of the K├Âlsch style since becoming acquainted with it in its native Cologne, Germany, while attending the 2006 World Cup; he entered his latest version of the style into the competition, which incorporated his homegrown Hallertauer hops.

Goldman-Armstrong and the brewers at Widmer Brothers Brewing worked together to adapt the homebrewed K├Âlsch recipe to production scale, which will allow the beer to be enjoyed by Portland Timbers fans throughout the region for the entire season. While the batch brewed at the Widmer Brothers brewery is much larger than the initial homebrewed batch, Goldman-Armstrong worked to maintain the integrity of his initial recipe, and even added a few ounces of his backyard Hallertauer hops to this batch of Green & Gold.

“We were homebrewers before we started the brewery in 1984,” said Kurt Widmer, co-founder of Widmer Brothers Brewing. “We are really excited to help Abe share his homebrew recipe with the Timbers Army and Portland Timbers fans, both at Jeld-Wen Field during Timbers matches and throughout the Pacific Northwest this season.”

Green & Gold K├Âlsch will be available for the duration of the Timbers 2013 season in 22 ounce bottles and on draught at pubs and restaurants in Oregon and Southwest Washington.

“I’m very happy to be able to share my Green & Gold K├Âlsch with thousands of Timbers supporters and the Timbers Army,” said Goldman-Armstrong. “Here’s to a great 2013 season for the Portland Timbers. Prost!”

We are RCTID. Each year, the Timbers Army 107ist hosts a homebrew competition, bringing out the best in what makes the Rose City great: craft beer, creativity, and a passion for the Green & Gold — the colors of the Portland Timbers and the hops and barley we use to brew beer. Timbers Army homebrewer Abram Goldman-Armstrong’s recipe was chosen as this year’s winner and is brewed by Widmer Brothers for you to enjoy as you cheer on your Timbers during the 2013 season. Green & Gold K├Âlsch is a golden straw colored beer with aromas of strawberry and cracked black pepper, a soft sweet bready malt flavor, a creamy body, and a crisp, dry finish.

The 107ist is the engine that fuels the Timbers Army. The organization is dedicated to supporting soccer in Portland from the grassroots to the highest professional levels. In addition to funding in-stadium activities such as tifo displays and bringing supporters to away matches, the organization raises money for local charities, including Operation Pitch Invasion, which builds and maintains soccer fields in the Portland area. For more information www.timbersarmy.org

What started as a dream for two ordinary brothers who just loved beer has now become a reality for two ordinary brothers who still just love beer. Kurt and Rob Widmer helped lead the Pacific Northwest craft beer movement in 1984 when, in their 20s, they dreamed of brewing unique interpretations of traditional beer styles. In 1986, Widmer Brothers Brewing introduced the first American-style Hefeweizen; today, the unfiltered cloudy beer is the company’s signature brew and one of the best-selling wheat beers in the country. Based in Portland, Ore., the brewery currently brews a variety of beers including its Rotator IPA Series, Drifter Pale Ale, Pitch Black IPA, Nelson Imperial IPA, a high-end Brothers’ Reserve Series and a full four seasonal lineup. For more information about Widmer Brothers Brewing, visit www.widmerbrothers.com.