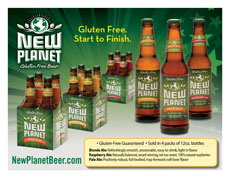 BOULDER, CO – After the holiday glut of heavy feasts and high-calorie beverages full of gluten, it is no surprise that many consumers kick-off the New Year with a resolution to eat healthier. And for those considering a gluten-free diet but fearful it won’t taste good, there’s good news. New Planet Beer Company, the innovative pioneer of great-tasting gluten-free beers, removes the notion that you have to sacrifice taste to enjoy a gluten-free beer.

“Just because someone is gluten-free, doesn’t mean they have to forgo the great taste of beer,” said Pedro Gonzalez, owner and founder of Boulder-based New Planet Beer Company. “We have removed ‘sacrifice’ from ‘gluten-free.’ And word is spreading that our gluten free beers taste exceptional. ”

Going gluten-free was faddish in some circles, winning over athletes and celebrities. Some think it’s a great way to lose weight or that it’s just plain healthier. But, there’s actually a large audience that’s avoiding gluten. The $4.2 billion market for gluten-free foods and beverages has exploded in recent years because more consumers are discovering they are gluten intolerant. Gluten is a protein in grains like wheat, barley and rye, which are typically found in beer. Many consumers have adopted a gluten-free diet by necessity or as a conscious choice when they discover they simply feel healthier without gluten.

New Planet beers are brewed with gluten-free grains that are approved by the FDA and the company takes special care to segregate the brewing process to avoid cross contamination. Every batch is tested for compliance.

“We are gluten free from start to finish and all the ingredients we use are posted clearly on the label,” said Gonzalez.

New Planet is rapidly spreading across the U.S and is now available in 42 states. The company recently expanded its production capabilities to keep pace with demand. New Planet plans to increase capacity by 50 percent in 2013 to keep up with demand for its widely popular and outrageously tasty beers.

Set in the heart of Colorado craft beer country, New Planet Beer Company began operations in September 2009 by introducing the first gluten-free beer brewed and bottled in Colorado. From a humble beginning self-distributing from the back of a red pickup truck, the trailblazing company has grown with distribution to more than 42 states while winning awards and accolades for great taste.

New Planet is based in Boulder, Colo., and was founded by Pedro Gonzalez who was diagnosed with Celiac Disease in 2003. Always a craft-beer lover, Gonzalez could not find a gluten-free brand with great taste, so he began his quest to make a great-tasting gluten-free craft beer that everyone could enjoy.