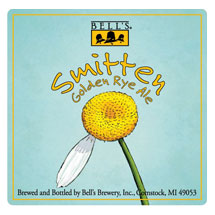 KALAMAZOO, MI – With a new year comes to a new addition to the Bell’s seasonal spring lineup. In early February, Bell’s Smitten Golden Rye Ale will be released on draft and in six-packs – just in time to help transition into warmer days. Coming in at 6% ABV, Smitten pours a hazy gold appearance.

“This is the perfect beer to help brighten those gray winter days and help warm your heart,” said Laura Bell, Marketing Director for Bell’s Brewery, Inc.

Drawn from one of Larry Bell’s oldest recipes, Smitten began as part of a series of rye beers at the Eccentric Café in downtown Kalamazoo, where a variety of new and old favorites are still brewed right next door at Bell’s original location. That series also included Black Rye, Rye Stout and Kal-Haven Ale.

A combination of sharp citrus and resinous flavors from the Pacific Northwest hops with the earthy, rustic overtones of the rye malt yield an interesting and refreshing take on the American Pale Ale. Formerly called Golden Rye Ale, Smitten is the first new regular bottle release since Oarsman Ale debuted as a year round offering in 2010.

For more information on where to find Smitten as well as other Bell’s beers, please visit the Bell’s Beer Finder online or contact your local retailer.

Bell’s Brewery, Inc. began in 1985 with a quest for better beer and a 15 gallon soup kettle. Since then, we’ve grown into a regional craft brewery that employs more than 200 people over an 18 state area, in addition to Puerto Rico and Washington DC. The dedication to brewing flavorful, unfiltered, quality craft beers that started in 1985 is still with us today. We currently brew over 20 beers for distribution as well as many other small batch beers that are served at our pub in Kalamazoo, the Eccentric Cafe. Our ongoing goal is to brew thoughtfully, creatively and artistically. We strive to bring an authentic and pleasant experience to all of our customers through our unique ales and beers. For more information, please visit bellsbeer.com