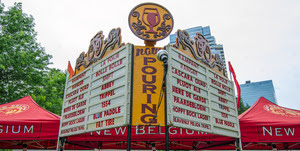 Ft. Collins, Colo. — New Belgium is still accepting original, creative movie clips through April 1 to have their work showcased in New Belgium Brewing’s annual Clips Beer and Film Tour. Clips will travel to more than 20 cities from May to November. This marks the fifth year for the beer-toting, film-traveling, nonprofit-benefiting show that travels coast-to-coast.The films should be less than five minutes and touch on (but aren’t limited to) these topics:
Selected films and their respective artists are subject to fame and beer-fortune, with audiences from coast—to—coast seeing the chosen films. New this year, New Belgium will create a trophy-worthy beer, in custom-screen printed bottles, made exclusively for ALL selected film artists.Clips is a national beer and film festival that invites guests to try New Belgium’s unique Lips of Faith series alongside popular classics, while watching short films by New Belgium friends and fans. Attendees get to enjoy a night under the stars with proceeds going to local nonprofits in each city. Since its inception in 2010, Clips has raised $366,893 for nonprofits nationwide.To submit your film, click here and to watch a video about the Clips Beer and Film Tour and learn more go to http://www.newbelgium.com/Events/clips-beer-and-film.aspx.

About New Belgium Brewing Company
New Belgium Brewing, makers of Fat Tire Amber Ale and a host of Belgian-inspired beers, is recognized as one of Outside Magazine’s Best Places to Work and one of the Wall Street Journal’s Best Small Businesses. The 100% employee-owned brewery is a Platinum-level Bicycle Friendly Business as designated by the League of American Bicyclists, and one of World Blu’s most democratic U.S. businesses, and a Certified B Corp. In addition to Fat Tire, New Belgium brews nine year-round beers; Ranger IPA, Rampant Imperial IPA, Shift Pale Lager, Snapshot Wheat, Sunshine Wheat, 1554 Black Lager, Blue Paddle Pilsener, Abbey Belgian Ale and Trippel. Learn more at www.newbelgium.com.