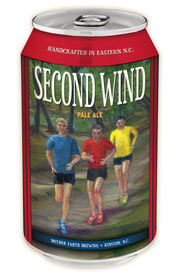 KINSTON, NC – Mother Earth Brewing, a 40 barrel craft brewery located in Kinston, NC recently announced that it is installing a Cask brand canning line. The canning line will occupy a space that is currently under renovation and adjoins the brewery’s present location. It’s is anticipated that the canning line will be operational this spring and the first canned Mother Earth Brewing beer will hit the market just in time for the active summer season.

The first two beers scheduled to be canned are new additions to Mother Earth Brewing: Second Wind Pale Ale and Sunny Haze, a Hefeweizen Style Ale. Head Brewer, Josh D. Brewer notes that “every beer the consumer can currently get in bottle form from Mother Earth Brewing will continue to be made; the cans are an addition to our line-up.” Canned beer was once thought of as inferior, and bottled beer reigned. But in the last decade, more and more craft breweries are canning some (or all) of their craft beers. President Trent Mooring explains “cans are lighter to transport, and there’s no fear of breakage, but it really gets down to taste- some beer enthusiasts simply prefer the taste of canned beer, believing cans preserve flavor and carbonation better than bottles.”

Mother Earth Brewery is a 40 barrel craft brewery that bottles and kegs beer for sale in its Kinston, NC Taproom, and for distribution in bars, restaurants and retail locations throughout North Carolina.