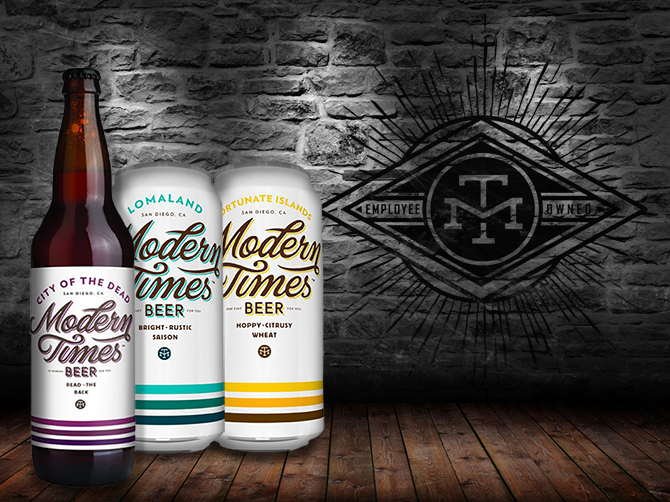 Modern Times Beer Co. today announced the implementation of an employee stock option plan (ESOP), giving workers a minority ownership stake in the company. The move makes the 4-year-old beer company the first employee-owned brewery in the state of California.

In order to form the ESOP, Modern Times repurchased 30 percent of its total equity from 11 silent investors via a bank loan from Comerica and cash from the company.

Modern Times founder Jacob McKean has retained a majority stake in the business, while 30 percent of the company has been transferred into an ESOP.

“This is my single proudest achievement as founder and CEO of Modern Times,” McKean said in a press release.

McKean told Brewbound that he analyzed various methods for returning value to his investors since founding Modern Times in 2013.

“It pretty quickly became apparent that an ESOP was the best option by far,” he said. “It would provide a major win for investors, for our employees, for our industry, and for me, since it puts in place an ownership structure that is a permanent buyer for any outstanding shares.”

McKean said that an ESOP allows Modern Times — which grew 82 percent in 2015 and sold 40,500 barrels of beer, according to data from the Brewers Association — to retain its independence while providing its initial investors with “an outstanding return.”

He added that the ESOP would reward employees, enhance the company culture, and create “a sustainable ownership structure that will replace me when I’m ready to move on.”

“None of the other options offered all that,” he said.

About 15 months ago, McKean hired Ambrose Advisors, an investment bank and financial advisory firm that specializes in ESOPs, to begin laying the groundwork for the program.

Ambrose Advisors senior managing director Michael Harden, who structured and advised Modern Times on the transaction, and who has worked on several brewery ESOPs, said the San Diego-based craft brewery’s plan is being provided to employees at no additional cost. Employees will become fully vested in Modern Times shares that have been allocated to their accounts after six years, meaning they own that stock outright and the company is then obligated to buy shares back at their current market value price once those employees leave the company, Harden said.

Modern Times’ employee-ownership program will be instituted with a retroactive starting date of January 1, 2017, which Harden said is significant because employees become partially vested — 20 percent — after two years.

McKean told Brewbound that “virtually every single employee” will be eligible to obtain a piece of the company.

“There aren’t many places where a bartender can earn an equity stake in one of the fastest growing companies in a growth industry,” McKean said.

McKean said that 30 percent ownership was the minimum threshold for reaching employee-ownership status and achieving meaningful tax advantages from the sale. He added that he’d like to reach 100 percent employee ownership “as soon as it’s financially feasible.”

Meanwhile, the loan from Comerica has given Modern Times “much more access to capital than we had before,” which will help with a number of forthcoming expansion projects, McKean said. Modern Times, operates a 30-barrel production brewery in San Diego’s Point Loma neighborhood as well as a pair of San Diego tasting rooms, and is slated to open two new tasting rooms in Anaheim and downtown Los Angeles. A third project, in Encinitas, is still awaiting city approval.

“So we’re coming out of this deal with happy employees, happy investors and a greatly expanded war chest of capital,” McKean said. “Selling to a strategic buyer or private equity firm was not only completely unnecessary for growth, it didn’t offer half as good of a deal by comparison.”

As those new projects come together, McKean plans to promote from within and tap additional outside talent for various management positions. Modern Times plans to provide those employees with financial literacy education as well as management training, McKean said.

“We aim to have a highly engaged ESOP with lots of involvement in corporate governance,” he said. “There will be greater employee involvement in setting the direction of the company. We don’t just want employees to be owners on paper, we want them to be owners in practice every single day.”

There are potential drawbacks to employee ownership, however. Harden said that improperly structured ESOP transactions, in which the company has an obligation to repurchase shares abruptly, is a risk for the company. Another risk is overleveraging the company through external bank lenders.

“The key is to look at the total debt capacity of the business and be sure to set aside plenty for working capital and future growth initiatives, use the balance, if any, to allow cash out for the ESOP buyout transaction,” Harden said.

He added that that good candidates for ESOPs have at least 20 employees, are profitable and have the capacity to take on debt as well as growth capital.

“Having grown up in craft beer that I’ve heard an awful lot of talk over the years about community, values, etc., it really surprises me and disappoints me that there are not a ton more employee-owned craft breweries,” Kenary told an audience of nearly 200 industry professionals. “I thought every other week for the last couple of years, you’d be reading about another craft brewery selling to an ESOP as opposed to another craft brewery selling to a large brewery or to a private equity firm.”

A full press release with additional information is available on the Modern Times blog.