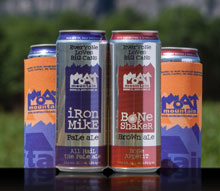 Moat Bone Shaker Brown is an English-style brown ale with a rich, malt body and medium hop bitterness, and is 5.5 percent alcohol by volume. It is the company’s second beer to be distributed in this unique size package.

Moat Mountain became one of the first small craft breweries to bring a beer to market in 24 oz. cans with its release of Moat Iron Mike Pale Ale in 2011.

“Craft beer consumers are embracing aluminum can packaging in increasing numbers,” said Steve Johnson, owner, Moat Mountain Brewing Company. “At the same time, there is continued growth in single serve packaging. By working with Rexam, we were able to embrace both these trends and bring our beers to market in a 24 oz. can that consumers love.”

The company chose Rexam cans because they help its beers stand out in a crowded marketplace. Moat Mountain also benefits from the many advantages that aluminum cans deliver for beer including durability, portability and increased freshness. In addition, cans are the best sustainability choice with a recycle rate at more than double other beverage packages.

“As the industry leader in 24 oz. can production, we were able to work with Moat Mountain and help them launch in this popular package,” said Rich Grimley, Chief Operating Officer, Rexam Beverage Can Americas. “It’s a great choice to stand out on retail shelves while delivering superior recycling and environmental benefits as well as filling and distribution economics.”

Moat Mountain Smokehouse and Brewing Company opened its doors in North Conway, New Hampshire in 2000. For 12 years, the 174-seat brew pub has been serving up award-winning ales and lagers that are brewed on-site. The company began packaging its beers for distribution in 2011. As it gains popularity among craft beer connoisseurs, Moat Mountain’s expansion plans include renovating a historic property inBartlett, NH this winter to house a new brewery with an annual capacity of over 8000 barrels per year. For more information, visit www.moatmountain.com.

Rexam is a leading global consumer packaging company. We are one of the leading global beverage can makers and a major global player in rigid plastic packaging. We are business partners to some of the world’s most famous and successful consumer brands.

Our vision is to be the best global consumer packaging company. Rexam’s sales from ongoing operations in 2011 were in the region of ┬ú4.7 billion. We have more than 80 plants in 25 countries and employ close to 19,000 people. Rexam is a member of the FTSE 100 and its ordinary shares are listed with the UK Listing Authority and trade on the London Stock Exchange under the symbol REX. For further information, visit www.rexam.com