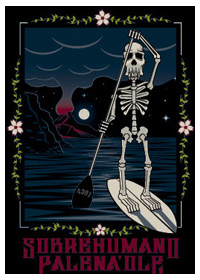 Yesterday, we wrote that Maui Brewing Co. is close to finalizing a deal on new property that will triple the brewery’s current footprint. The new space and expanded brewhouse will allow the the company to increase production over 100,000 barrels annually.

We also noted a few new limited-release offerings scheduled to hit shelves throughout 2012.

Today, the company officially announced its collaboration with Jolly Pumpkin Artisan Ales of Ann Arbor, Mich.. The two brewers will have combined to create a unique red ale, Sobrehumano Palena ‘ole. Two versions of the beer will be packaged, with a sour offering coming from the folks at Jolly Pumpkin.

Below is the press release with more details.

LAHAINA, MAUI, HI – Maui Brewing Co. (MBC) is proud to announce a collaboration with Jolly Pumpkin Artisan Ales (JPAA) of Ann Arbor, Michigan to create a very special beer, Sobrehumano Palena ‘ole. This will be Maui Brewing’s first collaboration released in a can. The release is scheduled for June 8 at SAVOR, an annual craft beer and food exposition held in Washington DC, and will reach all 11 states Maui Brewing Co. beers are available.

Sobrehumano Palena ‘ole is a red ale brewed with liliko’i and cherries. MBC and JPAA will both brew this beer; however MBC will use standard fermentation while the JPAA version is a barrel aged sour. The beers will be packaged both by MBC (in cans) and JPAA (in bottles). MBC will produce approximately 4000 cases and 80 barrels in draft of the Maui version.

Ron Jeffries of JPAA tells us a little about how this project came together, “John and Garrett were planning their collaborations for 2012 and because John is from Michigan and coming home for the holidays my name came up. This whole idea came together really fast — just weeks before John’s visit. It’s been a very challenging blend to develop — I’m super-excited about it and a little intimidated at the same time. I’ve been enchanted by Hawaii for years and it’s been great to work with everyone at MBC and get to know them. I always enjoy collaborations but this one is something really special.”

Just like the beer itself, the name, Sobrehumano Palena ‘ole, is a blended Spanish-Hawaiian term meaning “superhuman” and “without limits”. John Walsh of Maui Brewing Co. says, “I think the names for the beer are a perfect fit. When we started this there were literally no limitations or boundaries placed on the project whatsoever. That type of latitude is rare. Collaborating with Ron and Jolly Pumpkin has been a dream of mine for years. It’s an honor to see it become reality.”

John was also behind the idea of the artwork that will grace the MBC cans and JPAA bottles. While each design is different, both renditions include an acknowledgment of the distance in miles from Lahaina, Hawaii to Ann Arbor, Michigan. “The idea for the artwork has been floating around in my head for years. Given Ron’s love of Hawaii and our shared interest in paddle boarding, it came together nicely,” comments John.

Maui Brewing Co. is a truly Hawaiian brewery, and proud to be wholly produced in Hawaii. Recognized as Hawaii’s #1 craft beer since 2005, the company has a strong commitment to the local economy and the environment. MBC beers are packaged with the most eco-friendly materials. Cans are manufactured on Oahu and designed by local Maui artists. They have the added bonus of better protecting the beer from both light and oxygen damage a which can compromise the taste. Plastic rings are dangerous to marine life and therefore, a unique, recyclable plastic carrying device is used to hold the cans. The spent grain from beer production is donated to local ranchers for cattle feed and composting. MBC is also very active in several local Hawaiian charities.