Massachusetts craft brewers are once again asking state officials to reform a 44-year-old state franchise law that governs the relationships between suppliers and distributors.

On Tuesday, droves of industry stakeholders turned out for a hearing at the State House to hear comments from both wholesalers and brewers over a bill that would dramatically loosen franchise law restrictions, allowing smaller brewers more freedom to switch distributors.

A trio of brewers, including Boston Beer’s Jim Koch, shared their support of House Bill 245 — introduced by Rep. Alice Peisch (D-Wellesley) earlier this year — which, as written, would enable breweries whose brands account for less than 20 percent of a wholesaler’s total annual sales to terminate contracts, without cause, as long as wholesalers are also compensated “fair market value” for the loss of business. A pair of distributor lobbyists, meanwhile, testified that the legislative effort would negatively impact distributor businesses, stifle the growth of craft beer and ultimately harm the very companies pushing for change.

Under the state’s existing system, brewers wishing to sever a relationship with a wholesaler must first show “good cause,” which can be difficult to prove, and win an appeal from the Alcoholic Beverages Control Commission (ABCC). It’s an arduous process than can cost small manufacturers thousands in legal fees, hamper growth and strain wholesaler relationships if an appeal is unsuccessful. Currently, distributors in the state that sell a brand for at least six months enjoy indefinite ownership of the rights to that brand.

The issue of franchise law reform has been at the forefront of the state’s industry each of the past three years, with similar bills having been previously introduced in 2012 and 2013, all backed (and opposed) by familiar players.

Speaking to a handful of lawmakers on Tuesday, Koch, whose Samuel Adams line of beers helped pave the way for thousands of new craft entrants, said the law made sense when it was established in 1971, but believes reform is needed to match how the industry has matured. When the law was passed, there was one brewery in the state, Koch said, and upwards of 60 wholesalers. Today, there are about a dozen wholesalers and more than 120 licensed pub brewers, farm brewers and manufacturers.

Rob Martin, president of both Ipswich Ale Brewery and the Massachusetts Brewers Guild, and Rob Burns, co-founder of Night Shift Brewing, joined Koch in providing testimony on behalf of brewers at varying stages of their business lifecycle, noted one lawmaker.

In opposition, Bill Kelley, president of the Beer Distributors of Massachusetts, a trade association lobbying on behalf of beer wholesalers, contended that, should House Bill 245 pass, distributors would be less likely to invest financially in new companies in fear of being unceremoniously dumped. Kelley argued that the number of brands available to consumers would decline, adding that brewers already have plenty of latitude in how they bring their beer to market.

“The premise of this bill suggests that breweries have their hands tied. That premise is completely false,” said Kelley. “Today, if a brewery of any size believes that a distributor is not using its best efforts to promote the brewery’s brand and wants to fire that distributor, there is a straightforward process at the Alcoholic Beverages Control Commission for the brewery to do that.” 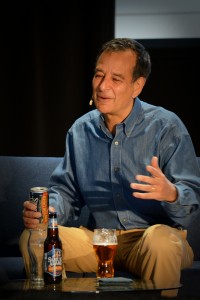 In a press statement, Kelley’s organization claimed that, “Between 2008 and 2013, over 70 breweries changed distributors smoothly,” and that “In the past 24 years, less than six cases have gone to the Alcoholic Beverages Control Commission as a result of disagreements.”

Ipswich’s Martin, though, suggested the process isn’t so straightforward, offering an anecdote from his own history.

“I had a small beer brand I gave to a distributor, and it wasn’t a good fit for the distributor, and the sales declined,” he said. “I then offered to pay that distributor to have my brand back, the brand that I had put my sweat and tears into…  And they would not accept payment for it. Sales declined to a point where I had to discontinue the brand. That’s what we’re trying to rectify. I had to change my business plan, my business model, my employees were at risk, all because I couldn’t move my brand to somebody who would be better suited for it.”

Also at issue is the distinction of applying the carve out to “small brewers,” as the proposed 20 percent exemption would effectively apply to all but a short list of large multi-national companies.

In 2014, New York enacted similar legislative reform allowing brewers that produce less than 300,000 barrels annually and make up less than 3 percent of a wholesaler’s sales to terminate contracts — also for fair market value. At 20 percent, the Massachusetts bill would treat large craft breweries like Boston Beer and Sierra Nevada the same as much smaller operations. This, added Louis Cassis, president of the Wine & Spirit Wholesalers of Massachusetts, would likely draw a federal lawsuit from the excluded companies claiming discrimination.

“This law is not a protection for small brewers,” said Cassis. “Under the definition in this statute, only three brewers, Budweiser, Miller, and Coors, would be exempt from this law. Everyone else would be a so-called small brewer and that doesn’t seem to fit the definition.”

The Brewers Association, for its part, defines small brewers as those producing less than 6 million barrels a year.

Regardless, Burns at Night Shift, which is on pace to make and self-distribute 5,000 barrels this year, disagreed with Cassis’ assessment, clarifying the issue does impact very small brewers.

“As we continue to grow, we need the help of distributors, and we look forward to partnering with one. The challenge for us, with a business that’s so rapidly changing day to day, we don’t know what the right distributor is,” said Burns. “The one that might meet our needs today could not be the one that meets our needs tomorrow. So we just ask that we have the option to leave a wholesaler if our needs change, their needs change, if the contract isn’t met.”

The committee on Consumer Protection and Professional Licensure now has until March to review and analyze the bill, taking into account all of yesterday’s testimony, before either reporting it out for eventual vote or killing it, like its past iterations.

This latest dispute is also playing out concurrently with an ongoing investigation into illegal pay-to-play practices. Craft Beer Guild LLC, a distributor group that attended Tuesday’s hearing, was charged with offering bribes to a number of on-premise retail operators. Five retail groups were also recently cited for accepting payments from the wholesaler.