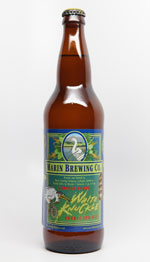 In 2012, a total of 502 beers from 127 breweries were examined across 15 different beer categories and the judging scale incorporates aroma, flavor intensity, balance, complexity, and mouth-feel. Proprietor Brendan Moylan is excited to make such a showing:

“Northern California is known for it’s BIG hoppy beers,” he said. “We brew assertive ales for all our hop lovin’ fans. I’m so proud of Arne for this repeated honor. Being Grand Champion in the Imperial Ale Category is huge!”