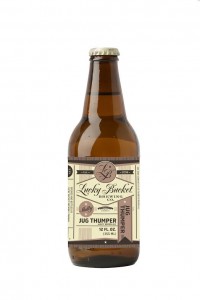 LA VISTA, NE — Lucky Bucket Brewing Company is excited to announce the release of their newest beer, Jug Thumper, a malty brown ale. This is the first package beer release from Lucky Bucket in almost two years. Jug Thumper will be available on draught and in six packs in retail accounts throughout the state.

Lucky Bucket played off of their pre-prohibition style theme for this brew stating on the label: “Just as the jug player was the backbone of old time bluegrass bands, malted barley is the backbone of great beer. Jug Thumper malty brown is packed with a plethora of delicious barley varietals — 2 Row Barley, Caramel malt, and Chocolate malt.” Jug Thumper six packs will join the five other Lucky Bucket beers currently available in the market starting in mid December. It is also expected to be available on tap around the Omaha/Lincoln metro areas starting next week.

“We brewed several test batches and received feedback from our fans before releasing Jug Thumper,” says Mike Cunningham, head brewer for Lucky Bucket. “We’re very excited for people to try the final product — it’s exactly what we were shooting for.”

Lucky Bucket will celebrate with a release event for Jug Thumper next Thursday, December 4th in their tasting room from 4-10pm.