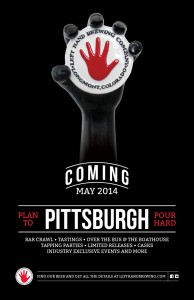 Left Hand Brewing today announced its entrance into the greater Pittsburgh market, further strengthening distribution on the East Coast, which has been a focus for the brewery thus far in 2014.

The Longmont, Colo.-based brewery has tapped Frank B. Fuhrer Wholesale Co. for coverage in the Steel City and surrounding markets. Left Hand’s new push in Pennsylvania comes after years of solidifying its presence in Philadelphia and Eastern parts of the state. The brewery entered Pennsylvania in 1996, but limited production capabilities prevented it from going deeper into the Pittsburgh market.

“In recent years it’s just been kind of like everyone else, sort of a growing pain, waiting for our production expansion so we could sort of move into new markets, no matter if the market was in the same state,” said Emily Armstrong, Left Hand’s marketing coordinator.

Those growing pains now appear to be in the rearview mirror, however.

“Having managed sales in the Mid-Atlantic region for years, I am psyched to finally bring Left Hand beer to Western Pennsylvania,” said Dan Conway, brewery sales representative, in a company statement. “The growing momentum of the brewery allows me to turn my focus exclusively to my home state of Pennsylvania. I’ve been contacted by so many fans and friends over the years and now I can finally say with authority that we’re here.”

Earlier this year, the brewery launched new distribution in Maryland and Washington D.C. through Legends Limited Distributing, but while Left Hand has spent a portion of the year adding or fleshing out its presence on the East Coast, it also has broader aspirations. Left Hand is eyeing Iowa for a fall launch later this year and market research is “underway” in California, per company statement.

In 2013, Left Hand produced 65,879 barrels, an increase of 32 percent over the year prior. Production is expected to jump another 29 percent in 2014, as the brewery is on pace to roll out 85,000 barrels. By the Brewers Association’s latest count, Left Hand is the country’s 38th largest craft brewery.

The brewery is also hosting a slew of launch events in the Pittsburgh area, the calendar for which can be viewed here.