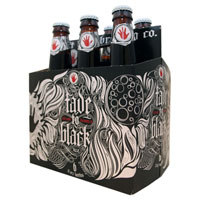 LONGMONT, CO — Fade to Black. That time of year when the light fades away. In the fourth year of the renowned winter series, Left Hand introduces a Rocky Mountain Black Ale as Volume 4. Showcasing the duality of dry roasted malts and hop bitterness, Colorado Centennial hops take center stage of this pitch black ale.

Volume 4 looms overs its predecessors with a sharp bitterness and dry roast, celebrating the darkness and leering in the face of warmer days. The ale pours black as a winter night with an off white head. Your first inhale is dominated by citrus and roast, as slight sweet malt gets pushed back by initial citrusy hops followed by powerful Italian Amaro, Gentian and hop bitterness. The Rocky Mountain Black Ale finishes with a pleasant duality of dry roasted malts and hop bitterness.

Brewed for the darkness, Fade to Black speaks in volumes. Volume IV is the latest edition of Left Hand’s esteemed winter seasonal series. The Fade to Black family made its presence known beginning in 2009 with Volume 1, when the Foreign Export Stout won GABF Gold. The following years have presented our handsmoked Smoked Baltic Porter in 2010 and last year’s Pepper Porter featuring Chipotle, Serrano, & Ancho chiles, as Volume 2 and 3 respectively. This year’s Rocky Mountain Black Ale takes its place in the Fade to Black series, standing apart as the dry and bitter cousin. Perfect for those chilly winter nights, Left Hand’s Fade to Black is a cult favorite, as fans eagerly seek out each year’s offering.

Celebrating nineteen years of brewing a well-balanced portfolio of craft beers, Left Hand Brewing Company is located at 1265 Boston Avenue in Longmont, Colorado. The brewery has received 18 medals at the Great American Beer Festival and 8 medals at the World Beer Cup, and its beers are now available in 25 states. “Sometimes you’re not in the mood for what everyone else is having.”