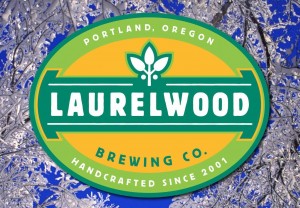 Portland, OR — Laurelwood Brewing Co. is happy to announce the hiring of new brewmaster, Shane Watterson. Watterson has worked for Laurelwood over 4 years in the capacity of brewer and recently the lead brewer. He brings a wealth of knowledge and enthusiasm to the position, plus is a home grown Portland resident. “I look forward to the opportunity to learn new things and come up with fun beers,” stated Watterson.

Watterson’s experience in the brewing world isn’t just here at Laurelwood. He has worked as an assistant brewer at Deschutes Brewing in Portland, went through the Beer Judge Certification Program, was the education chair for the Oregon Brew Crew, attended the American Brewer’s Guild Intensive Brewing Science & Engineering Program and started as a avid home brewer. When asked what his main goals and objectives are as the new brewmaster of Laurelwood Watterson said, “This first year is to continue what Vasili has planned out. I want to establish a little more of our sour beer and barrel aging programs, and build more comradery amongst the guys in the brewery.”

The transition from former brewmaster Vasili Gletsos to Watterson will take place over the next few months, until Gletsos’ departure for Hill Farmstead Brewery in Vermont mid December.

Laurelwood is a family owned brewery that creates one of the most recognized regional craft beers. Owners Mike De Kalb & Cathy Woo-De Kalb are dedicated to sustainable and organic practices, and first began producing certified organic beer in 2001. Laurelwood’s product line is known for its creativity and quality therefore winning many national and international beer awards. Laurelwood’s handcrafted beers can be found on draft and in bottles throughout Oregon and Washington. To find out more about Laurelwood Brewing Company go online at www.laurelwoodbrewpub.com.