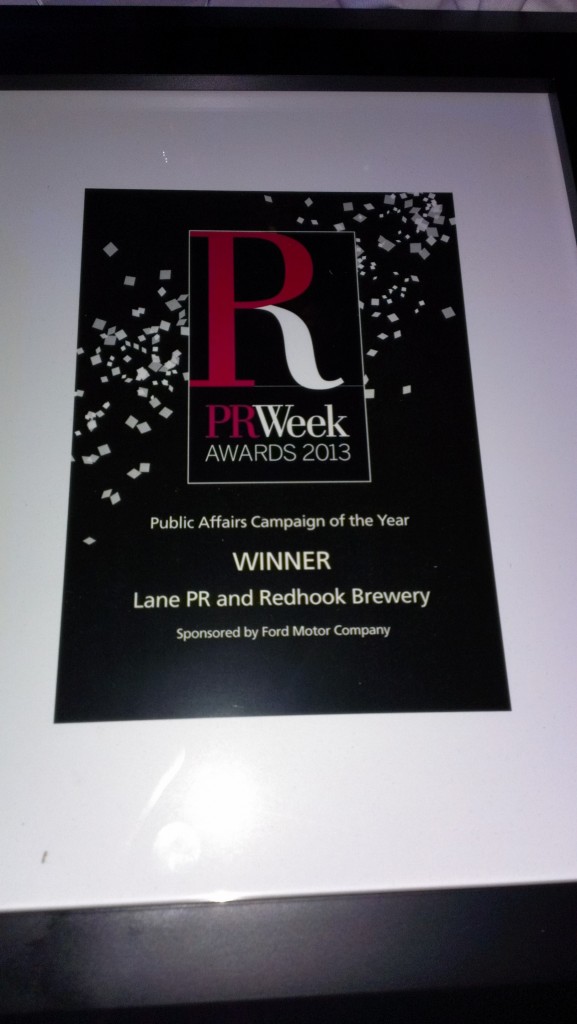 PORTLAND, OR – LANE, a national, independent agency specializing in public relations, digital marketing and investor relations, has won a 2013 PRWeek Award for Public Affairs Campaign of the Year. The award recognizes LANE’s work with Redhook Brewery, a Craft Brew Alliance (CBA) brand, to change the legal definition of beer in New Hampshire.

LANE was one of five finalists competing for the award, and contenders included:

Redhook Brewery has a pub and brewery in Portsmouth, N.H.

New Hampshire’s beer definition preceded the advent of the craft movement and its nontraditional ingredients used in brewing. As a result, a number of Redhook beers produced in other parts of the country were banned from production in the state. Furthermore, Redhook was prohibited from even storing the beers in New Hampshire for distribution to other East Coast markets.

In January 2012, Redhook was approached about hosting a casual gathering for New Hampshire legislators. The LANE team, led by Ted Lane in New York and Shannon Brewer Riggs in Portland, Ore., used the event to launch an educational campaign for the captive legislative audience. The team highlighted opportunities lost due to outdated language, presenting the hurdles that restrained innovation, production and growth among all brewers in the state and the associated ramifications on employment and taxes.

Thanks to LANE and Redhook Brewery’s lobbying efforts, the definition of beer in New Hampshire has changed. New Hampshire Governor John Lynch signed House Bill 1241 in June 2012, allowing craft brewers to select from a much broader array of ingredients for their beers.

“We’re incredibly proud that LANE continues to be recognized for generating results that build business, and our beer team’s collaborative efforts were truly remarkable,” said Wendy Lane Stevens, president of LANE. “They developed a campaign that succeeded in not only expediting a change in New Hampshire’s definition of beer, but in opening up opportunities for Redhook and other craft brewers to grow their businesses and contribute to the state’s economic growth and prosperity.”

About the PRWeek Awards:

The PRWeek Awards are recognized as one of the industry’s highest accolades given annually to the best corporate, nonprofit and agency teams, as well as the campaigns they produce. The competition is judged exclusively by a group of more than 75 esteemed judges from across the industry. More than 800 entries were received. The winners were announced at a celebration of more than 1,000 attendees March 7 in New York City.

LANE is a national, independent firm focused on driving business and sales success for clients through strategic communications counsel. With offices in New York and Portland, Ore., LANE provides integrated public relations, digital marketing and investor relations services for clients in a host of industries, including financial services, consumer, food and beverage, and technology. Founded in 1990, the agency has won several awards, including the 2011 Silver Sabre Award, the 2010 Bronze Bulldog Award for best new product launch, and the 2009 PR Week Young PR Professional of the Year. For more information about LANE, visit www.lanepr.com. Connect with LANE on Twitter at Twitter.com/LANEPR and LinkedIn at LinkedIn.com/company/lane.