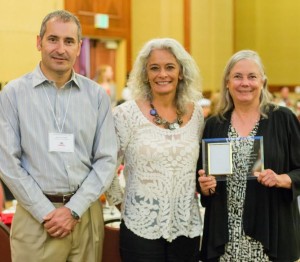 “California’s small businesses are the economic engine of our state,” said Betty Jo Toccoli, President of the California Small Business Association. “Ladyface Ale Companie was celebrated for their successful small business and contributions to their community.”

Owners Cyrena & Jean-Luc Nouzille were on hand to accept the award. Cyrena noted that, “It is such an honor to be recognized in the community by Senator Pavley who has such a long history of making our city a great place to live, work and play. I am also proud of the growth of our industry, especially on the local level, with the greater Los Angeles area emerging as a new craft beer culture.”

With 81 businesses in the state of California honored that day, six were craft breweries, including Russian River Brewing Company and Golden Road Brewing. Craft breweries are “main-street” businesses that, combined as an industry, have become economic powerhouses in the U.S., creating jobs and increasing the tax base. The entrepreneurial spirit is alive and well in California and favorable state legislation for the brewing industry helps businesses like Ladyface succeed. Ladyface currently employs 48 people.

According to the California Craft Brewers Association, there are over 450 small and independently owned craft breweries operating in the state–roughly double the number since Ladyface first opened its doors–that are responsible for 44,000 jobs and contributing $4.7 billion to the state’s economy. More data can be found here:

Ladyface will also be recognized at the upcoming Agoura Hills City Council Meeting on Wednesday, June 25, 2014 at 6PM.