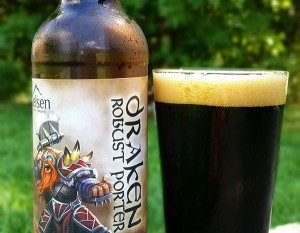 DERRY, N.H. — Kelsen Brewing Company is showcasing its skills as an award-winning brewery by releasing a special beer that was originally deisgned by founders Erik Olsen and Paul Kelly during their homebrewing days. Draken Robust Porter is a 6.8 percent alcohol-by-volume beer. It is big, malty and dark and exudes a roasty aroma from its tan head. Beginning today, Kelsen Draken Robust Porter will start arriving in 22-ounce bomber bottles at retailers and on draft at restaurants and bars in New Hampshire.

“We think of Robust Porter as being a great beer style to pair with food, much like a red wine. When deisgning the recipe, we wanted to incorporate some of the flavor components of our favorite big, red wines” said Erik Olsen, one of the company’s co-founders. “When you take a sip of Draken, you will experience subtle flavors of raisins and dark fruits with a touch of hop bitterness and alcohol warmth, true to the American-style Robust Porter.”

Draken is a limited release beer that will be brewed during the cooler months of the year. Draken’s dedicated Web site, http://kelsenbrewing.com/draken-robust-porter/ , provides more detail about the offering, along with suggested food pairings.