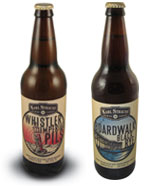 The piercing howl of the SD#1 Whistler Buoy echoes for miles, hailing ships of rocky shores ahead. Like its namesake, Whistler Imperial Pils warns and welcomes at the same time. The grassy and floral bitterness of Saaz hops warns this is no ordinary pilsner, while authentic Moravian malts provide a toasted malt balance that welcomes another sip. Finishing crisp and dry, this addition to the Coastal Reserve Series is right at home in America’s finest beer city.

Availability: On draft and in 22oz bottles beginning June 1, 2011 across Southern California

When the sun goes down past Crystal Pier, the postcard view of the Pacific fades into the dark. As the tourists head off down the Boardwalk, a distinctly local vibe returns to PB. Boardwalk Black Rye is a spicy black ale with a hop profile that’s pure West Coast. Black and caramelized rye malts add complex spicy and roasted notes, while three massive additions of Ahtanum hops provide the vibrant floral aroma and citrus hop character of a Double IPA. Keep Boardwalk out of the cellar, this hoppy offering is best enjoyed fresh.

Availability: On draft and in 22oz bottles beginning August 1, 2011 across Southern California