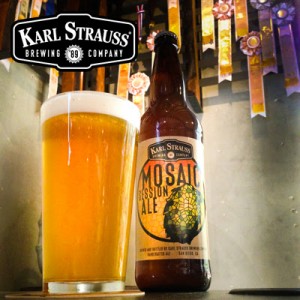 These medals for Mosaic take the company’s tally to 64 medals won in the last four years. This year alone, Karl Strauss has won ten awards across three state competitions—the San Diego International Beer Competition, Los Angeles International Commercial Beer Competition, and the California State Fair Commercial Craft Brew Competition. “We’ve been helping craft the San Diego beer scene for 25 years and it’s great to see our beers consistently recognized for top quality and consistency,” says Segura. With almost 1,000 entries per competition, winning at these competitions is no easy feat. “Competitions give us the chance to showcase our lineup of beers which span the full spectrum of beer styles,” says Segura. “People might know us for Red Trolley Ale or Tower 10 IPA, but we’re constantly brewing up new award winning beers like Mosaic and our barrel-aged Wreck Alley.”

In addition to beer competition medals, the company was recently honored with the Gold Medallion award for “Best Brewery” by the California Restaurant Association, San Diego Chapter.

For more information about Karl Strauss’ recent wins and to learn more about its diverse spectrum of award winning beers, visit www.karlstrauss.com. Share it. Cheers.

Karl Strauss Brewing Company has pioneered the San Diego beer scene since 1989 with innovative beer releases like Big Barrel IIPA, Wreck Alley Imperial Stout and Mosaic Session Ale. The brewery has won 64 medals over the past four years and its Red Trolley Ale is one of the most award winning beers in the world. The company is currently ranked #41 on the list of the country’s top craft breweries with sole distribution in California. 2014 is on pace to be another exciting year of double-digit sales growth, with the main brewery tasting room and newly remodeled brewery restaurant in Sorrento Mesa now open. For more information visit www.karlstrauss.com or call the brewery at (858) 273-2739. Share it. Cheers.