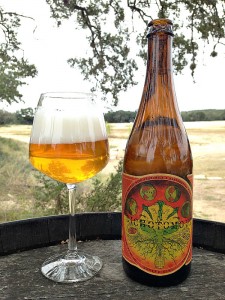 Austin, TX — We are excited to introduce Jester King Estival Dichotomous — our summer saison brewed with chamomile and spelt and refermented with strawberries. Estival Dichotomous is our second seasonal saison following Hibernal Dichotomous, which we released in April of 2014. As we mentioned at the time of the Hibernal Dichotomous release, our brewing is largely driven by the seasons. We make farmhouse ales when the weather is hot and temperatures are conducive to fermentation in stainless steel, and we make spontaneously fermented beers and barrel fermented beers when temperatures are cold and conducive to overnight inoculation of wort and slow maturation in oak. We also use the ingredients that are available to us at various times during the year. For instance, in the winter we make beer with citrus fruit, in the spring we use peaches, in the summer we use apricots, blueberries and figs, and in the fall we use grapes, horehound, lemon bee balm, and squash. Estival Dichotomous is an analog for the summer season. It’s a beer that’s evocative of the summer weather and its bounty, particularly the smells of hay resting in the fields late in the season.

Estival Dichotomous was brewed in early July of 2014 with Hill Country well water, barley, spelt, hops, and chamomile. It was fermented with our unique mixed culture of microorganisms consisting of brewers yeast and native yeast and bacteria harvested from our land in the Texas Hill Country, and then refermented with strawberries. Finally, it underwent a long term refermentation and maturation in bottles, kegs, and casks over the course of three months. Mixed culture fermentation is a very slow and patient process, so while Estival Dichotomous is evocative of the summer, its release is not tied to the season from which it originated. In terms of the chamomile addition, we stayed true to the words and wisdom of our friend Yvan De Baets of Brasserie De La Senne in Brussels, Belgium. Yvan writes in Phil Markowski’s Farmhouse Ales, “If spices are used, it must be with the utmost moderation. A saison is not by any means a spice soup.” Estival Dichotomous is 6.0% alcohol by volume, has a finishing gravity of 1.000 (0 degrees Plato), and was 4.1 pH at the time of bottling. Given the tartness that has developed in the flavor profile, we suspect the pH has slowly dropped over the last three months while in the bottles, kegs, and casks.

Estival Dichotomous will be released at Jester King Brewery on Friday, November 14th when our tasting room opens at 4pm. It will be available by the glass, as well as to go in 750ml bottles ($12, limit 3 per customer per day). Approximately 3,000 bottles are available, and at this point, we do not anticipate Estival Dichotomous being available beyond Jester King, aside from a few special events.