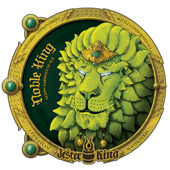 Noble King is a medium strength, dry, golden ale brewed with our farmhouse yeast, and, as its name suggests, an abundance of noble, European hops. We’re all very big fans of the subtle, delicate earthy flavors of classic European noble hops, and particularly enjoy the way that those flavors interplay with the character of our farmhouse yeast. Though the hops in Noble King are front and center, they don’t overwhelm the palate, the way some high alpha (highly bitter) New World varieties sometimes can. This results in a beer that’s thoroughly hoppy, yet elegant, dry, balanced, and drinkable.

Following Saturday’s debut, it will be available on draught and cask-conditioned at a small number of venues and special events around the state, with an anticipated bottle release some time in late November or December.

If you were at any of our Austin Beer Week events or our Funk’n Sour Gravity Fest, you may have noticed a few other new additions to our lineup, as well, including “farmhouse” editions of Wytchmaker Rye IPA and Black Metal Imperial Stout, which will ultimately replace the English ale yeast versions that we’ve been brewing up until this point. The strain of farmhouse yeast that we use is much more difficult to work with and more sensitive to environmental variables than the English strain, but we believe that, when handled correctly, it adds an extra layer of character and complexity to the finished beers. Using the same house yeast for all of our beers also allows us to manage and reuse that yeast much more effectively. Over several generations, it will continue to evolve and adapt to the particular environmental conditions of our brewery, contributing its own unique terroir to all of our beers. This house terroir is something that we feel is part of what it means to be an authentic farmhouse brewery.

In addition to Noble King and the farmhouse versions of Wytchmaker and Black Metal, we also have a new Farmhouse Table Beer that’s currently in the works, to be followed soon by a limited release Farmhouse Strong Ale, a new Farmhouse Provision Ale, and a farmhouse version of Commercial Suicide Dark Mild. Some of you may recognize the terms “Farmhouse Table Beer” and “Farmhouse Provision Ale” as having been applied at one time to two other beers that we showcased during Austin Beer Week: Das Wunderkind! and Boxer’s Revenge. When we first formulated these beers, we had a particular vision in mind for each of them, but after extended aging in oak barrels with wild yeast and souring bacteria, Das Wunderkind! and Boxer’s Revenge quite literally took on a life of their own, and as we continued to sample them, those visions began to change. Eventually, we felt that the terms “Farmhouse Table Beer” and “Farmhouse Provision Ale” no longer captured the essence of what they had become, so we decided to change those descriptions. Das Wunderkind!, we felt, had become a very good example of a sour saison, of the sort Yvan De Baets talks about in Phil Markowski’s book, Farmhouse Ales, so we decided to label it “Sour Saison”. (Look for a very limited bottle release of Das Wunderkind! Sour Saison sometime in the upcoming months.) Boxer’s Revenge has not been bottled yet, but when it is, we plan to go with the more straightforwardly descriptive designation, “Barrel-Aged Wild Ale”.

Our new Table Beer and Provision Ale, which we haven’t yet named, will be “sibling beers” to Noble King, made with similar malts and hops, and our farmhouse yeast, but with the Table Beer lower in ABV and more sessionable, and the Provision Ale much stronger and better suited to cellaring. Ultimately, all three beers will become part of our regular, year-round line up. At the same time, we will also continue to produce Das Wunderkind!, Boxer’s Revenge, and a variety of other “wild” beers, but we will do so without any pre-announced release dates or promises of consistent supply, so that we can give them the time they need to mature and, as we’ve said all along, let them tell us when they’re ready to be packaged and released.