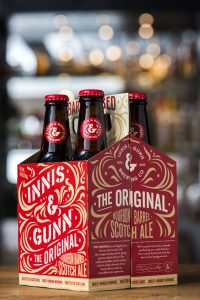 EDINBURGH, Scotland — Innis & Gunn, one of the UK’s most successful international craft brewers, has unveiled a brand new look with a unifying packaging rebrand across its core barrel-aged and craft brewed beers range.

The introduction of the new Innis & Gunn packaging marks a return to its roots in barrel-ageing. A pioneer of barrel-ageing, the craft brewer has over a decade of experience using two different methods of achieving the incredible flavour that a barrel can impart to the beer – the traditional beer into barrel method which is used for the brewer’s popular small-batch limited edition range of beers, and the unique to Innis & Gunn ‘barrel into beer’ method developed for its core range by Founder and Master Brewer Dougal Gunn Sharp.

The brewer’s innovative ‘barrel into beer’ technique turns the traditional method on its head to barrel-age more beer at a greater consistency, without losing any of the flavour. The return to barrel-ageing on the core range has been the culmination of years of research to establish the technology and supplier partnerships to create this technique of breaking the barrels down into pieces, which are then toasted to develop a spectrum of aroma and flavour elements.

The versatility of the ‘barrel into beer’ technique is showcased in the new barrel-aged rum beer in the core-range, which has been aged using 100% Jamaican rum barrel pieces. Taking inspiration from the Caribbean home of the rum barrels, Innis & Gunn has launched the new rum barrel-aged beer with the name Blood Red Sky, replacing the previous Rum Finish in the line-up.

“First and foremost our mission is to push the boundaries of craft beer, to keep evolving and developing new ideas and techniques,” said Dougal Gunn Sharp, Innis & Gunn Founder and Master Brewer. “I’m enormously proud of our commitment to quality and innovation, resulting in our new unique barrel into beer method of barrel-ageing. This puts Innis & Gunn in the privileged position of being able to amplify the flavour in our beer using both traditional and modern innovative techniques. 2018 commemorates our 15th year anniversary and we’ll be introducing some very exciting beers lined up to showcase the possibilities of barrel-ageing beer.

The new look for Innis & Gunn in store and in bar is designed to share our story and craft credentials with consumers, reflecting our unique position at the centre of craft brewing tradition and innovation.”

The new packaging design takes inspiration from Innis & Gunn’s home city of Edinburgh, Scotland. Each day at 1pm at Edinburgh’s iconic Castle a large gun sounds in a tradition dating back to 1861 when it allowed ships nearby to set the maritime clocks they needed to navigate the world’s oceans and deliver renowned Scottish products. The distinctive swirls and ripples on the packaging are a nod to the nearby “One O’ Clock Gunn” and reflect the explosion of flavour found in Innis & Gunn beers. The new look will extend beyond packaging into point-of-sale materials.

The Innis & Gunn rebrand will take place across their core-range line-up including: The Original, Barrel Aged Scotch Ale, Blood Red Sky, Jamaican Rum Barrel Red Beer, and Bourbon Barrel Porter (the new name of their Bourbon Aged Dark Ale), as well as their Irish Whiskey seasonal offering, and future styles. The new packaging will start hitting US shelves this month.

The new packaging launch follows a transformational 18 months for Innis & Gunn which has seen significant growth in the business, including the recent announcement that the world’s leading consumer goods private equity firm, L Catterton, has invested in the business, fueling the Edinburgh based company’s ambitious growth opportunities in the UK and internationally.

To find Innis & Gunn in the US, please visit our importer’s website at:

Since its foundation in 2003 Innis & Gunn has grown to become one of the UK’s most successful international craft beer businesses, reporting continued year on year volume growth. In 2016 Innis & Gunn sold more than 27 million bottles of beer around the world with a full product range including Original, its flagship oak-aged beer, award winning Innis & Gunn Craft Lager, recently launched American and Session IPAs, and a successful limited edition programme of barrel-aged beers.

The Innis & Gunn Brewery in Perth is the brand’s home for innovation and barrel-ageing, where Master Brewer Dougal Gunn Sharp and his team of highly skilled and passionate brewers develop the flavoursome beers that are loved by craft beer fans in over 28 countries.

The first Innis & Gunn Beer Kitchen opened in Edinburgh in summer 2015, winning the UK Casual Dining Concept Award in January 2016. A successful roll-out of the bar and restaurant concept with a focus on beer and food pairings has seen Beer Kitchens open in Dundee, St Andrews, and most recently the largest to date in Glasgow’s Ashton Lane, where there is an onsite craft brewery producing new tank beers exclusive to The Beer Kitchen bars.

In November 2016, Innis & Gunn raised £2.4 million through its first equity crowdfunding campaign, AdventureCapital™. At the close of the campaign, the brewery had almost 2000 investors.In September 2017, the world’s largest consumer goods private equity firm, L Catterton, invested in a 27.9% stake in Innis & Gunn, bringing unparalleled experience in brand building and understanding of global consumer markets to fuel the brewer’s growth internationally.

Winning a multitude of awards for its beers, Innis & Gunn’s was immensely proud to take home five awards at the 2017 Scottish Beer Awards, and in July 2016 to take Gold and Bronze awards in one of the largest and most renowned international beer competitions, the US Open Beer Championship, the only Scottish brewer to win. 2016 also saw Innis & Gunn win Gold and Silver in the New York International Beer Awards, and take home the accolade of Scottish Brewery of the Year.

United States Beverage (USB) is a premium craft and import beverage sales and marketing company located in Stamford, Connecticut. USB provides a national distribution network for a portfolio of premium beverage brands and has been the fastest growing independent importer over the last three years. www.unitedstatesbeverage.com.