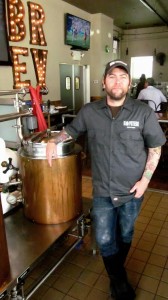 Rowe brings with him more than decade of experience, where he has worked in almost every facet of the craft beer industry. Rowe began his career at Harpoon Brewery, starting as a bottling line operator. Over his seven year tenure at Harpoon, he held positions as a filter technician, maintenance technician, brewer, forklift operator and distribution representative. Most recently, Rowe served as Head Brewer for Cape Cod Beer, Cape Cod’s only craft brewery, where he managed all aspects of production, packaging and recipe development.

“Having Jeff join the Hopsters team is a huge asset for us,” said Lee Cooper, owner of Hopsters. “His experience in the industry will be invaluable as we continue to create exciting, experimental beers and solidify our name in the New England craft beer scene.”

Hopsters’ recently announced the acquisition of its commercial brewery license, allowing it to sell its own custom craft beer on premise and to wholesale accounts. The receipt of the new license also makes Hopsters the first-ever commercial brewery in the suburb of Newton, Massachusetts.