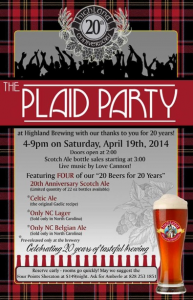 Asheville, NC – Twenty years has passed since Highland first opened its creaky basement door, in a town otherwise bereft of breweries. On this special occasion, Brewmaster John Lyda gives a nod to local Scots Irish history, this time with a new beer: Highland Brewing Company 20th Anniversary Scotch Ale. It will be released at the brewery on April 19th at the official public anniversary event, The Plaid Party. In addition to the Scotch Ale, three more beers in the series of 20 will be released that night. The series is a masterpiece of brewing delights.

ÔÇó Four beers will be brewed on the 50-barrel and packaged in kegs and 22-ounce bottles, forming a collectible mini-series. Each “Big Batch” will be developed by a different brewer or brewers

ÔÇó Sixteen beers will be kegged

ÔÇó Three beers are collaborations with the other three most senior breweries in town: Wedge, Green Man and French Broad

With 20 beers from April to December, releases are every couple of weeks on average, and visitors are likely to find an anniversary brew on tap no matter what day they walk in. Beers will be revealed online, one by one, just prior to their releases.

Oscar Wong, John Lyda and John McDermott bet long on a fledgling industry. In the US in 1994, there were 537 craft breweries. Today there are around 2,800 and the number is growing fast. Since 1994, the dream of being Asheville’s hometown brewery has changed, and it hasn’t.

“We thought we’d be the only ones, and here we are, with more breweries popping up all the time,” said founder Oscar Wong. “It’s terrific. We never expected to go this far, and now Leah is taking the company into the next level. We have much more to look forward to.”

What hasn’t changed is that, despite vast development of beer culture and breweries in Asheville, Highland is rooted here by location and by name. “Our name anchors us here. The name “Highland” honors the legends of the Scots Irish which are so deeply woven into this area, the Southern Appalachians,” said Leah Wong Ashburn, Vice President. “I love telling people that my father, a Chinese man, born and raised in Jamaica, who considers himself Irish because he went to Notre Dame, owns a Scottish brewery. How amazing is that?”