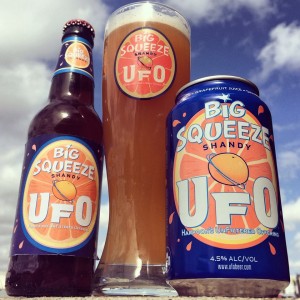 BOSTON, MA — The Harpoon Brewery is pleased to introduce UFO Big Squeeze shandy, an unfiltered wheat beer blended with all natural grapefruit juice. This seasonal offering from the brewer’s UFO series, a line of unfiltered beers, has arrived just in time for summer in bottles, cans, and on draft. Sweet with a hint of tartness, Big Squeeze shandy is a New England summer treat.

“Our UFO beers are about adventure and fun,” says Harpoon CEO and co-founder Rich Doyle. “UFO Big Squeeze shandy is a refreshing complement to this great season in New England. The combination of grapefruit juice with unfiltered wheat beer is a fantastic blend. It will be a staple in my fridge for the next few months.”

The Harpoon Brewery was founded by beer lovers, Rich Doyle and Dan Kenary. In 1986 Harpoon was issued Brewing Permit #001 by the Commonwealth of Massachusetts, since it was the first brewery to brew commercially in Boston after a dormant period of about 25 years. Harpoon’s line of craft beer features its award winning IPA and UFO White?beers, along with special seasonal selections. In 2000 Harpoon purchased a second brewery in Windsor, VT, making Harpoon the 9th largest craft brewer in the US. Harpoon has since introduced the limited batch 100 Barrel Series and the as well as the all-natural Harpoon Craft Cider made from freshly pressed, local apples. For more information about Harpoon beers and visiting the breweries, visit www.harpoonbrewery.com.