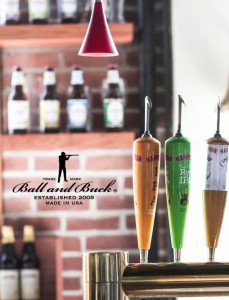 BOSTON, MA—Harpoon Brewery & Ball and Buck are joining forces for Boston’s first Brewdown Pop-Up. The Brewdown Pop-Up is an event series created by leading marketing innovation company GYK Antler to celebrate the local craft beer community and the collaborative spirit that spawns great ideas and partnerships. Each Brewdown Pop-Up pairs a New England brand with a New England craft brewery to create a one- off collaboration beer and pop-up event.

“We’re really excited to have these two amazing brands — Harpoon & Ball and Buck— on board for the first Brewdown Pop-Up,” says Terry Lozoff, Executive Vice President at GYK Antler and craft beer writer at DrinkInsider.com. “Both brands embody what Brewdown is all about: a true commitment to craft and collaboration. And in this particular case, a commitment to American-made and American heritage.”

The first Brewdown Pop-Up event will be held on Thursday, September 11th at Ball and Buck’s Newbury Street retail location, where the Harpoon/Ball and Buck collaborative beer will be unveiled. Limited invitations are available by visiting gykantler.com/brewdown. The collaboration will also be showcased on September 13th at American Field, an all American-made tradeshow produced by Ball and Buck that brings in over 75 all-American-made brands from around the country.

“It’s always fun to have a few beers with people who share a passion for local craftsmanship, so when Terry invited the Ball and Buck team to our beer hall, it didn’t take long to think about brewing a beer with them,” said Chris Bonacci, Brand Manager at Harpoon Brewery. “It’s a great opportunity for us to help create the kind of social drinking experience that has been our goal since we first started brewing.”

The style of beer was crowd-sourced to fans of both brands, and after selecting a DIPA with all American ingredients, the two partners got together on August 8th to brew the beer at Harpoon’s South Boston brewery. The pilot beer will also be available for a limited time at Harpoon’s beer hall starting on September 12th.

“Boston, being the birthplace of craft beer, is a city that prides itself on having an extensive selection of sophisticated brews,” said Mark Bollman, President and Founder at Ball and Buck. “As the foremost outfitter for stylish gentlemen, we are excited for the opportunity to work together with Boston’s most innovative brewery to build a beer that compliments your outfit like your favorite pair of boots. With the experienced folks at Harpoon, we crafted a special brew that combines the values of these two Boston brands and the perfect amount of hops.”

The Harpoon Brewery was founded by beer lovers, Rich Doyle and Dan Kenary. In 1986, Harpoon was issued Brewing Permit #001 by the Commonwealth of Massachusetts, since it was the first brewery to brew commercially in Boston after a dormant period of about 25 years. Harpoon’s line of craft beer features its award-winning IPA and UFO beers, along with special seasonal selections, and is currently the 12th largest craft brewer in the U.S. Harpoon’s commitment to collaboration and experimentation is a cornerstone of the brewery, and has been most publicly showcased through their 100 Barrel Series. More information about Harpoon beers and visiting the breweries, visit www.harpoonbrewery.com.

About Ball and Buck

The Boston based lifestyle brand focused on producing the highest quality Made in USA menswear. With its flagship outfitters on Newbury St, Ball and Buck is known for their innovative collaborations, unparalleled quality, and overall cool factor. What else is there to say? Learn more about Ball and Buck at http://www.ballandbuck.com.

Three years ago, GYK Antler started Brewdown as an opportunity to bring together local craft brewers and an influential group of young professionals, marketing folks and craft beer lovers around Boston. The events took place in an environment that celebrated the art of craft beer (with live brewing taking place), and allowed consumers to get up-close and personal with the local brewers that were driving Boston’s burgeoning craft beer scene. At each event, a single craft beer company would showcase their beers and participate in the “office” brewing of a crowd- sourced beer, live in front of a 100-person audience. After a successful run of events with breweries like Notch, Backlash, Long Trail, Peak Organic, and Foolproof, GYK Antler has evolved the concept and taken it to the next level with Brewdown Pop-Up.