Presenting to a group of eccentric innovators and entrepreneurs who gathered in Carmel, Calif. for the “e.g” conference, Stone Brewing co-founder Greg Koch today revealed plans to launch a new $100 million fund for investing in “real” food and beverage companies.

Beginning with an industry he knows quite well, craft beer, Koch said he’s secured $100 million from a group of “independent investors,” that will be used to acquire “minority, non-controlling” stakes in craft breweries. Discussions with additional investors looking to help finance the new venture as also in discussion, Koch said.

Called “True Craft,” the new platform “allows craft breweries to stay craft breweries,” Koch told the crowd at e.g., which bills itself as a conference that is attended by “the most industrious and iconoclastic talents of our time.”

“They can make their own decisions about their future,” he said. “They can stay independent. They can get financing and flexibility that they need to flourish, while keeping their soul and control.”

It’s unclear exactly how the new venture, which Stone has described as a “craft beer investment company,” is structured or who its investors are, but Koch also said he was in discussion with a “small group” of craft breweries who are interested in joining the new consortium. 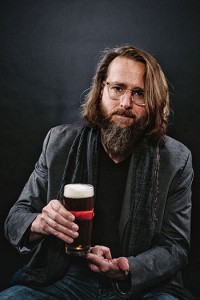 Describing the concept as an “alternative to being pushed out or bought out from the mega commodity world,” True Craft is Koch’s answer to “market forces that are beginning their march to recompress the beer industry,” he said.

“There is a squeeze coming in the craft beer world,” he said. “True Craft’s goal is simple: Give craft brewers another option than selling a majority interest to private equity or selling out to big beer.”

True Craft, he claims, was built to “help misfit companies stick around in a world that is designed to help them assimilate like the Borg.”

During his presentation, Koch showed a photo of a bar at the Burbank Airport which featured taps from a number of craft brands such as Golden Road, 10 Barrel and Craft Brew Alliance. The common thread? Anheuser-Busch InBev either wholly or partially owned all of the beers on tap, Koch said, a phenomenon that creates the “illusion of choice.”

It’s worth noting that Stone Brewing Company filed for the Trademark “True Craft Brewing” on October 6, 2015, as pointed out by MiBiz editor Joe Boomgaard.

Additional information is available in Stone’s official press statement, reprinted below. Brewbound will continue to follow this story as it develops.

ESCONDIDO, CA – Today Stone Brewing announces True Craft, a company established to invest in craft breweries which are dedicated to remaining true to the definition of craft beer. Representing camaraderie in the industry, True Craft will make minority investments in craft brewers while allowing those breweries to retain their independent soul and control.

“Some people start companies to sell out. Some start companies because they are compelled to follow their passion. True Craft is for the latter,” said Greg Koch, Stone CEO & co-founder. “Craft beer needs an alternative model to the one that requires founders to sell their company in its entirety. In a world in which there are constant forces toward homogenization and fitting in, I specifically want to foster a world of uniqueness, depth and character.”

Outspoken about their commitment not to sell out to Big Beer, the co-founders of Stone have been investigating an alternative that would provide financing and operational guidance to small brewers who might otherwise have few options to protect the passion, heart and soul of their company. A year and a half in the making, Stone will be participating in True Craft as a founding member. The new venture has received an initial $100,000,000 brought forth from an investor group committed to the long term model. True Craft will welcome a handful of the best craft brewers in the business alongside Stone Brewing. Each brewery may participate in True Craft and in turn the company will provide minority investments to its members with minimal stipulations. All breweries will be aligned in the philosophical mindset of banding together to preserve craft while retaining full soul and control of their businesses for years to come.

“This is about setting up a consortium so we can not just survive, but continue to thrive in a world in which craft is being co-opted by Big Beer,” said Steve Wagner, Stone President & co-founder. “This allows companies like Stone to follow an ethos that involves independence and passion for the artisanal. By investing in True Craft now, we can be confident that our vision is locked in beyond our professional lifetimes and we feel privileged to help others in our industry do the same.”

True Craft’s detailed structure is still in formation and will be announced at a later date.

Founded by Greg Koch and Steve Wagner in 1996, San Diego-based Stone Brewing is the 10th largest craft brewer in the United States. Stone has been listed on the Inc. 500 | 5000 Fastest Growing Private Companies list 11 times,and has been called the “All-time Top Brewery on Planet Earth” by BeerAdvocate magazine twice. The multifaceted company will be the first American craft brewer to independently build, own and operate a brewery in Europe, and is also building a production brewery and destination restaurant in Richmond, Virginia. Brewing at both locations will be underway in summer 2016. Known for its bold, flavorful and largely hop-centric beers, Stone has earned a reputation for brewing outstanding, unique beers while maintaining an unwavering commitment to sustainability,business ethics, philanthropy and the art of brewing. For more information on Stone Brewing, please visitstonebrewing.com or the company’s social media sites: Facebook, Google+, Instagram, Pinterest, Twitter and TheStone Blog.