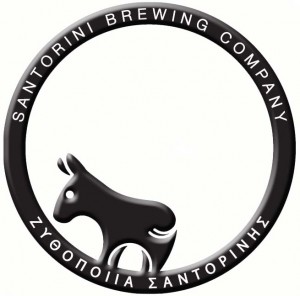 New York – Santorini is known for its natural beauty, deep blue seas, progressive food & wine scene and now beer. Beer? Each year tourists make the ascent from the port up to the main town of Fira on the back of a donkey. As a result, the donkey has become the beloved & ubiquitous symbol of the island. In 2011, Santorini Brewing CO opened its doors on the road from the airport to the quaint beachside town of Kamari and created the Donkey beers. The brewery has an annual production capacity of 75,000 liters.

Santorini Brewing Co is a made up of four partners — Yiannis Paraskevopoulos, winemaker for GAIA Wines, Majda Anderson, an ex-pat Californian now living on Santorini year-round, Steven Daniels of the UK and formerly a wine buyer of Odd Bins, and lastly, Boban Krunic, the Serbian born brewer. There are three styles of beer currently in production — Yellow, Red & Crazy Donkey. Only Crazy Donkey IPA is available for export.

In late October 2013, Santorini Brewing Co has exported its first batch of Crazy Donkey IPA into the US through NY- based Athenee Importers, the country’s oldest family owned importer of premium alcoholic beverages from Greece into the US.

Crazy Donkey is Greece’s first IPA and is produced with five kinds of hops, including Motueka from New Zealand and Carcade from Oregon. The beer has 6.5% ABV and an IBU of 50. Crazy Donkey is sold in 750ml glass bottles and retails for approximately $35-$40 a bottle. Crazy Donkey will be available in the United States in small quantities (less than 100 cases per shipment) throughout the winter months. Due to high local demand, the brewery will not export beer during the tourist season.

Crazy Donkey will be available in select markets across the United States as supply permits. For more information, please contact Andrea Englisis at 516-505-4800 or via e-mail at: andrea@atheneeimporters.com. The brewery’s slogan is: “Hip Hoppy Kick-Ass Ale”. You can find more information on the brewery at: www.santorinibrewingcompany.gr.