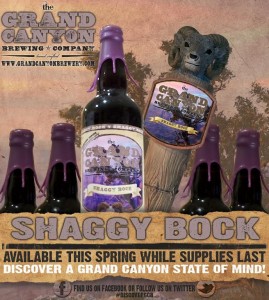 Shaggy Bock is a classic bock style ale made with Pilsner malt that has been smoked with locally sourced alligator shaggy bark juniper wood, then aged in a fermenter with toasted oak. And if that wasn’t enough flavor, the Grand Canyon Brewing Company has packed a Flavor Bomb with a toasted oak stick — the longer it ages, the stronger the flavor. Shaggy Bock pairs perfectly with holiday ham, smoked turkey and other BBQ meats.

For more information about the technology behind the Flavor Bomb and to order them for use in home brewing visitwww.theflavorbomb.com.