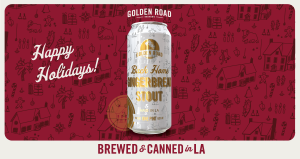 Los Angeles, CA — Just in time for the holidays (read: October), L.A.’s Golden Road Brewing has bundled winter’s favorite flavors into a pint-sized gift sure to please the palates of even the greenest of grinches. Back Home Gingerbread Stout debuts this season on draught and in newly designed four-packs of 16-oz cans available late October at retailers including Whole Foods, Costco, Trader Joe’s and BevMo! among others. The stout is currently on draught at The Pub at Golden Road Brewing and will be pouring at sister properties Tony’s Darts Away and Mohawk Bend in the coming weeks.

This winter warmer is Golden Road’s ode to co-founder Meg Gill’s fond Christmas-time memories. Every year Meg’s brother would wait in line for a special holiday beer from a small brewery near their hometown in Virginia – the coveted centerpiece of family gatherings and celebration. After one such journey to the east coast, Meg returned to L.A. with a few bottles of her beloved brew (unavailable on the West Coast) to share with the Golden Road team. Inspired by Meg’s experience and the tasty stout, Brewmaster Jesse Houck and his team developed a holiday beer worthy of the same love and affection.

The name Back Home Gingerbread Stout is one part nostalgia and one part rock n’ roll. Chuck Berry’s “The Promised Land” – often covered by none other than the Grateful Dead – chronicles the arduous journey from his home in Virginia to the promised land, L.A. Golden Road co-founder Tony Yanow was particularly inspired by this lyric: “Los Angeles, give me Norfolk, Virginia tidewater four ten o nine, tell the folks back home this is the promised land callin’ and the poor boy is on the line.”

The Back Home Gingerbread Stout package features hand-drawn images by Golden Road’s designer and a convenient gift tag (“To:” and “From:”) on the top panel.

In 2011, beer enthusiasts Meg Gill and Tony Yanow founded Golden Road Brewing to bring fresh beer to the local market in the most sustainable way possible. Brewed and canned in Los Angeles, Golden Road’s year-round offerings include Point the Way IPA, Golden Road Hefeweizen, Get Up Offa That Brown, 329 Lager and Wolf Among Weeds IPA. Golden Road is committed to engaging and supporting the growing community of socially-minded beer enthusiasts in Los Angeles. For more information, please visit goldenroad.la.