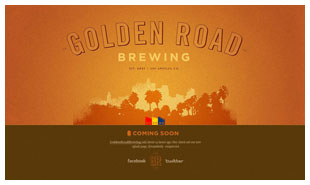 LOS ANGELES – The ever-growing craft beer scene in Los Angeles is about to get bigger. Come September, L.A. will get a new craft beer brand of its own: Golden Road Brewing in North Atwater Village, CA. The start-up artisanal brewery will aim to begin production of more than a thousand barrels in its first year and grow in the coming years.

At the helm will be CEO and Co-Founder, Tony Yanow (Tony’s Darts Away), who has tapped some of the most talented and well-regarded professionals in the craft brewing industry to bring Golden Road Brewing to full fruition: the dynamic Meg Gill (formerly of Oskar Blues Brewery and Speakeasy Ales and Lagers) is the other co-founder and will serve as President. She will be one of the youngest female brewery owners in the world. Jon Carpenter (formerly of Dogfish Head Brewery) will bring a true mix of art and science to his role as Brewmaster.

“We are all craft beer fanatics and we are all passionate about building a business that produces world class beer here in L.A.,” said Yanow. “Having Meg and Jon as the two cornerstones here, I have great confidence that we can achieve our goals. We’ve got the makings of one hell of a team.”

San Diego native, Jon Carpenter, is excited about moving back to Southern California: “I can’t wait to get back out west and brew some beer. I am sad to leave Dogfish Head but the opportunity to work here and build Golden Road from the ground up was too good to pass on.”

Golden Road will concentrate primarily on brewing hoppy California-style ales and will branch into other styles as well. The team is holding exact product descriptions close to their vests until they perfect their recipes on production scale batches. One things they are not being quiet about is their decision to can beer rather than using the craft standard of bottles. “We’ve already purchased our first canning line,” said Gill. “And we feel great knowing we’ll be putting our products in the right package, so we can deliver flavor, and economy to our drinkers without sacrificing our commitment to quality or the environment.”

“L.A. is one of the fastest growing craft beer communities in the country. We have a few great breweries around L.A. and many up north and down south. We see the beers that are demanded by drinkers but a lot of them just aren’t easily available or accessible to the general public,” said Yanow. “With Golden Road Brewing, we really want to help bridge that gap by providing local, reliably top quality craft beers that people can easily find and will really enjoy.”

Golden Road Brewing will be laid out in a three-building campus at the northernmost tip of Atwater Village. the distinctive primary colored buildings will are easy to spot, just off Interstate 5 and Highway 134. The blue building will be production, the red building will be barrel room and storage and the yellow building will be for offices, on-site sales, and eventually a pub and beer garden. Tours of the brewery will be available to the general public.

Golden Road Brewing is located at 5410 W. San Fernando Road, Los Angeles, CA 90039. The website will be located at http://www.goldenroad.la