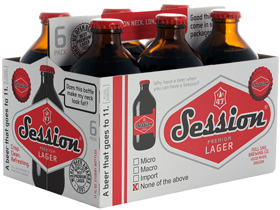 HOOD RIVER, OR — Full Sail Brewing announced today that they will be releasing their Session Premium Lager and Session Black Lager in six packs.

“Back in 2005 when we first brewed Session, we believed that our customers wanted more from craft beer than an IBU arms race. There was room for a beer that was balanced, nuanced and emphasized camaraderie more than extremity. Now several million cases later, that belief has been validated. So, we are extremely excited to release Session Premium Lager and Session Black Lager 6 packs,” said Irene Firmat, Full Sail Brewing Company’s Founder and CEO. 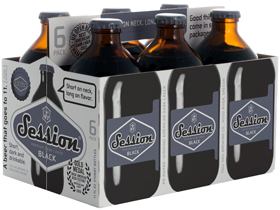 Not a micro, not a macro, not an import, Session is perfectly positioned for the customer searching for the perfect lager. It’s a world-class beer brewed by a pioneering craft brewer. Since the launch in 2005 the Session line has brought home GABF gold and silver, was named the World’s Best Premium Lager, and earned gold and bronze at the World Beer Cup. With more than 40 medals, and accolades from the Wall Street Journal to Epicurious to Vanity Fair – Session is more than a cute and interesting package.

“So who is the quintessential Session drinker? That’s hard to say, really. You see, virtually everyone who likes beer likes Session. Whether they’re craft beer aficionados, import drinkers or devotees of lawnmower beers, Session is the one beer they can all agree on. Even Session’s name speaks to that rare ability to cross boundaries. Beer geeks might presume we named it Session because it bears a resemblance to British ‘session beers,’ the ones that go down so easily you can drink two or three in a row. At the brewery in Hood River, Oregon, locals would insist it’s called Session as a shout-out to Full Sail’s boardsports heritage: as in surf session, jam session, have a good session. In fact, they’re both right. And that’s the beauty of Session. It’s inclusive without being ordinary. Accessible without becoming mainstream. It’s a brand that lets you own a little piece of it. And there’s nothing more powerful than that. And now, these two Sessions have their own brand new six-packs — that is pretty powerful too,” added Firmat.

The independent and employee-owned Full Sail Brewery is perched on a bluff in Hood River, Oregon, overlooking the most epic wind and kite surfing spot in the world. At this very moment our specialists in the liquid refreshment arts are crafting barley and hops into your next beer. Among the company’s most popular brews are Full Sail Amber, IPA, Pale, LTD, Wassail, Session Premium, Session Black, and Session Fest lager. Founded in 1987, the Full Sail crew has been fermenting godlike nectar for 25 years. Committed to brewing great beer and sustainable practices their award winning brews are now available in 29 states. The Full Sail Tasting Room and Pub is open seven days a week. Swing by for a pint, grab a bite, tour the brewery, or just soak up the view. Visit us online at http://www.fullsailbrewing.com or on Facebook and Twitter.