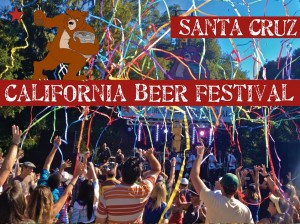 In keeping with the yearly tradition, a portion of the proceeds benefit the Gen Giammanco Foundation, a non-profit organization that provides financial support to student athletes to assist in their pursuit of both scholastic and athletic success in Santa Cruz County.

Saturday’s Craft Beer Heaven is THE event for any new or seasoned Craft Beer drinker and enthusiast! Expand your mind and pallet while sampling over 80 Craft Beers on tap, along with live music, mouthwatering food and perhaps a game or two of Bocce Ball. The main goal of CBFs “Craft Beer Heaven” is to shine a light on the Craft Beer movement and celebrate great beer!

On Sunday, bring the family, blankets and chairs to CBF’s first-ever Hamburger & Hops Music Festival! This Sunday Funday in the Park features Grade A Angus hamburgers, gourmet & fusion sliders, craft beer and a great entertainment lineup – a “Tribute to the Tributes”. Live music all day on the Main Stage by The “Unauthorized Rolling Stones”, “Petty Theft” (Tom Petty & The Heartbreakers tribute) and “Foreverland”, the electrifying 14-piece Tribute To Michael Jackson who are a yearly CBF favorite. Space is limited. Kids 12 and under, free. (Note: No beer sampling on Sunday; beer and food will be available for purchase).