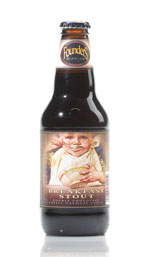 GRAND RAPIDS, MI – Say goodbye to sunburns and uninspired citrus-soaked summer pilsners; Founders Brewing Co. (www.foundersbrewing.com) offers bold flavor for the craft beer palate this month with the arrival of this year’s Breakfast Stout, available on tap and in bottles across the 23-state Founders footprint beginning September 21. Breakfast Stout carries a suggested retail price of $9.99 for a four-pack of 12-ounce bottles.

Breakfast Stout—a world-class ranked beer on BeerAdvocate.com and a top-50 beer at Ratebeer.com—is brewed with an abundance of oats, bitter and imported chocolates, and Kona and Sumatra coffee, making it the perfect beer to enjoy during cooler weather. Breakfast Stout is available throughout the cooler months (September 21, 2012, through February 28, 2013), making it the clear choice for craft beer enthusiasts who value great taste more than calendar credentials.

“I get asked all the time to name my favorite Founders beer,” says Dave Engbers, Co-Founder, Vice President of Brand & Education at Founders Brewing Co. “To me, they’re like children—you love different things about each one, but you love them all the same. Breakfast Stout is the beer I love to drink after the leaves begin to turn. It pairs perfectly with roaring fires, hearty foods and flannel shirts.”

A countdown to Founders’ Stout Season can be found at www.stoutseason.com, and the Twitter conversation can be followed at #StoutSeason. In addition, a tribute to the sad summer “beer chicken” can be found below.

Established in 1997 by two craft beer enthusiasts with day jobs and a dream, Founders Brewing Co. brews complex, in-your-face ales, with huge aromatics and tons of flavor. Founders ranks among the top 50 largest craft breweries in the U.S., it has received numerous awards from the World Beer Cup and the Great American Beer Festival and its beers are often rated among the best in the world by RateBeer and BeerAdvocate users. Located in downtown Grand Rapids, Michigan, Founders is a proud member of theMichigan Brewers Guild and the Brewers Association. For more information, visitwww.foundersbrewing.com.