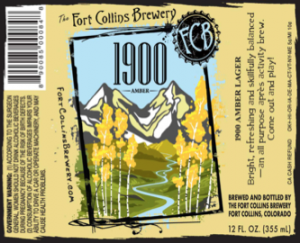 Fort Collins, Colo. — The Fort Collins Brewery, along with Gravity 1020 Modern Tavern has officially announced plans to retire their 1900 Amber Lager, ending its production by June, 2014.

While FCB’s current headquarters was being built in 2009, 1900 Amber Lager was created and introduced to the full-time lineup as a way to remember their old location at 1900 Lincoln Ave.

“We started out predominantly as a lager house at our old location and 1900 was originated to really symbolize where it all began,” said FCB’s General Manager, Tina Peters.

The 1900 Amber Lager has a German Melanoiden and Munich malts blend with Willamette hops to create a bright, crisp and balanced brew. 1900 received a gold medal in the 2009 US Open Beer Championship (USOBC), a bronze medal in the 2011 USOBC and placed 2nd at the Craft Lager Festival in 2012.

“We’re definitely sad to see it go, but as a craft brewery that strives to always better ourselves, we felt as a company it was more important to shift focus away from 1900 and to the present and the future direction of FCB,” said Peters.

As far as what craft beer drinkers can expect to see in replacement of 1900, Fort Collins Brewery remains tight-lipped.

“We’re continuing to expand and create new FCB brews and we’re excited to share that with the craft beer scene in the coming months,” said Peters.