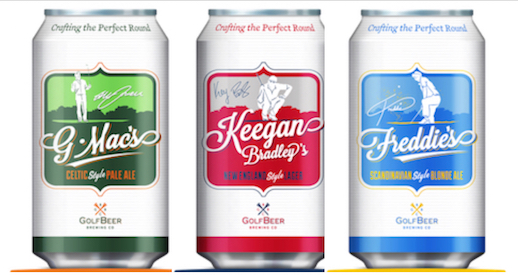 Every champion golfer comes to The Brew Hub imbued with a towering source of inspiration. It starts as a solitary journey, but it is one that no golfer, if he dreams of becoming a craft brewer, makes alone.

For Keegan Bradley, a boy from Woodstock, VT., it was a lager, brewed with the comforting guidance of the legendary Dr. Paul Farnsworth.

Northern Ireland’s Graeme McDowell is now tasting his own Celtic Style Pale Ale with the help of a man named Tim Schoen, the founder of Brew Hub.

Freddie Jacobson took his improbable dream, imagined first by his friend and business associate, Patrik Waxin, and delivered a perfectly crafted Blond Ale that is still being commercially brewed today.

Yes, down in Lakeland, Fla., they celebrate the beers of some of the legendary names in craft brewing. Their facility basks in the reflected glory of those who brew at ‘The Hub.’

But with this move into celebrity brewing, the contract manufacturer hopes to celebrate a few more wins, bringing on board Bradley, McDowell and Jacobson as the faces of GolfBeer Brewing Co.

Brews from GolfBeer Brewing Co., stamped with each of the golfers’ names, are scheduled to debut on draft and in 12 oz. cans at golf courses, country clubs and restaurants in Florida this year. Packaged products are also planned for launch in 2015.

It remains to be seen if the merchandising strategy will include keeping the cans cold with an insulated green jacket.

A full press release is below.

ORLANDO — Three of the top names in professional golf are now in the beer business. Freddie Jacobson, Keegan Bradley and Graeme McDowell will launch a series of easy-drinking craft beers through their new company, GolfBeer Brewing Co. The move marks the first time professional golfers have started their own beer company and have been associated with craft beer.

“Our lives have always revolved around golf, but we also are passionate about great beer, so we’re really excited about this,” said Freddie Jacobson, a founding partner of the GolfBeer concept. “I was first introduced to the idea of brewing a beer after a conversation I had with my friend and business associate Patrik Waxin. I immediately jumped at the opportunity to combine three of my passions: golf, beer and building a business. After doing my research and assembling a team of brewing experts, I reached out to my fellow players Keegan Bradley and Graeme McDowell to join me in this venture. Not only do they share my love of great beer, they also have an interest in building businesses and careers which transcend the golf course. Together we created refreshing and drinkable craft beers you can enjoy, whether you are on the course, at the 19th hole with friends, or at home watching a tournament on television.”

The beers were created to meet each golfer’s preference and taste profile: Freddie Jacobson’s Scandinavian Style Blonde Ale is a light ale brewed with Crystal malt and a variety of European hops; Keegan Bradley’s New England Style Lager is an easy-drinking lager brewed with two-row barley and a variety of North American hops; and G-Mac’s Celtic Style Pale Ale is a crisp, refreshing pale ale with a floral hop aroma and a snappy finish. Each of the golfers played a role in the design of the packaging which features their name, signature and silhouette. All three beers are between 4.5 and 5 percent alcohol by volume (ABV) and will be priced comparably to other premium craft beer.

“For me as a golfer and a restaurant owner, GolfBeer is the perfect marriage, bringing together two of my favorite things,” said Graeme McDowell. “I am excited to join the GolfBeer team and I look forward to sharing our beers, both at my restaurant Nona Blue and at courses and clubs throughout Florida.”

GolfBeer initially will be available on draft and in 12-ounce cans at select golf courses, restaurants and country clubs throughout the state of Florida. The company plans to introduce all three brands in 12- ounce glass bottle (six-packs) and expand to grocery stores, bars, and restaurants in 2015.

“To have a master brewer develop a beer based on my taste preference has been an incredible experience,” said Keegan Bradley. “The beers are delicious, the concept is unique and I’m excited to be a part of it.”

The team chose the Florida market to debut GolfBeer for a variety of reasons. Demand for craft beers in the state is growing at a faster rate than anywhere in the country, to the point that wholesalers and retailers can’t get access to enough craft beer to meet the demand. This need, coupled with the large number of recreational golfers and golf courses that call Florida home, made it the perfect market to introduce the company’s first line of beers.