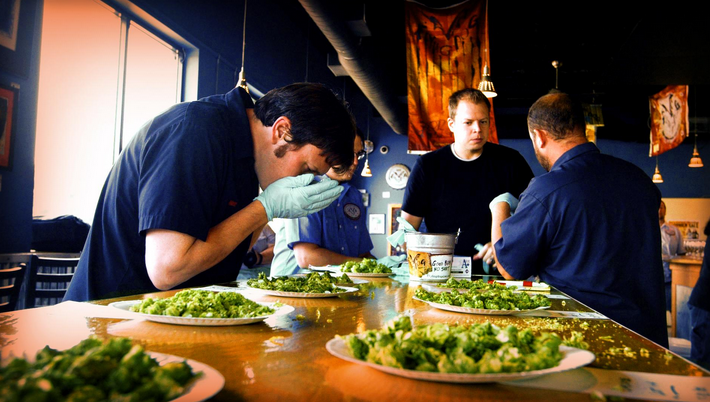 “We wanted to replicate the process of how we select hops from large-scale production growers from the Pacific Northwest,” Flying Dog Brewmaster Matt Brophy said. “Not only does that ensure the highest quality hops for our beer, but it also provides in-depth feedback to our local growers that they can immediately apply to their business.”

Hop selection involves cutting into dried, compressed hops and rubbing the individual cones between your hands. This process allows the full aromatics of the hops to come through, which provides a good indication of the aromas and flavors it will impart on a beer.

“What we’re looking for is a combination of aromatics and the appropriate moisture level from the drying process,” Brophy said.

Brophy and a team of Flying Dog brewers evaluated all hops submitted, which were anonymously labeled. They chose to purchase Cascade hops from Black Locust Hops and Cascade, Chinook, Centennial, and Magnum hops from Organarchy Hops. Black Locust is located in Northern Baltimore County and Organarchy in Western Maryland.

“The hop industry in Maryland has come a long way in the last five years alone,” Brophy said. “And as the industry continues to grow, the quality of what is being produced becomes paramount.”

Flying Dog will also use estate Cascade hops grown on the brewery grounds.

Secret Stash Harvest Ale is being brewed today and will be available in late September.