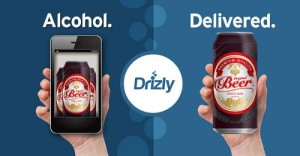 NEW YORK — Beginning today, the only way to get ice cold beer delivered to you in Manhattan and Brooklyn using your smartphone, is by downloading Drizly, the smartphone app for fast, convenient alcohol delivery.

Drizly today announced that it is the first and only service of its kind to offer beer delivery in Manhattan and Brooklyn. Drizly has been delivering wine and liquor in those cities since January. Now, consumers inManhattan and Brooklyn can place a single order through the Drizly app and have beer, wine or liquor delivered – or all three – from the largest and best retail delivery network in New York.

In New York, since beer is sold in a different retail location than wine and liquor, smartphone apps touting alcohol delivery have been unable to offer consumers the ability to add beer to their orders. That is, until today’s announcement from Drizly.

“By becoming the first and only app to deliver beer, wine and liquor from a single order, Drizly is officially the most convenient way for legal consumers to buy alcohol in Manhattan and Brooklyn,” said Nick Rellas, founder and CEO of Drizly. “With the best product selection, the best retail delivery network, and the same price as in-store, Drizly gives consumers good reason to never visit the liquor store again.”

DRIZLY SERVING THE HAMPTONS IN TIME FOR SUMMER

With Memorial Day and the symbolic kick off of summer vacation just around the corner, Drizly has visitors to The Hamptons (and year-rounders) covered with alcohol delivery service from Southhampton all the way to Montauk. Delivery times are subject to variability based on Drizly’s retail partner delivery network.

Drizly is a mobile lifestyle app that is the most convenient way for smartphone users who drink to get their beer, wine and liquor. Consumers of legal drinking age simply download the app to their smartphone and with a few taps of the finger, the consumer’s favorite beer, wine or liquor is on its way, in just 20-40 minutes. Delivery drivers then authenticate and validate IDs using Drizly technology. Backed by a world-class group of angel and institutional investors, the company has raised $4.8 million to become the Amazon for alcohol in Boston,Chicago, New York City (Manhattan and Brooklyn), The Hamptons, and other cities across the United States.