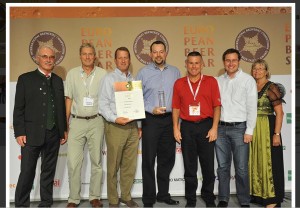 Brian Faivre brewmaster for Deschutes Brewery said, “Winning awards at both these competitions is a testament to the hard work our brewing team puts into every beer we produce. To be recognized at a national level against all the fantastic breweries out there is confirmation that our commitment to consistency, quality and pushing the envelope is working!”

At the European Beer Star 2013, competition was as tough as it has ever been: a total of 1,512 beers from 40 countries participated in the 2013 competition, an increase of 11% over the previous year. An expert committee evaluated the beers during an all-day blind taste held in the Doemens Brewing Academy in Gr├ñfelfing. The Abyss took home the gold medal in the Imperial Stout category.

The World Beer Award program also selects winners for internationally recognized beer styles from around the world by blind-tasting hundreds of entries from nearly 40 countries. Awards were announced following four rounds of judging by an international, highly respected judging panel. The competition selects, awards, and promotes to consumers the best beers available internationally. A complete list of awards for Deschutes Brewery in 2013 includes:

Celebrating its 25th anniversary this year, Deschutes Brewery began as a brew pub in downtown Bend, Oregon and is known for such brands as Black Butte Porter, its flagship brew and the nation’s number one selling craft porter, and the popular Mirror Pond Pale Ale. In addition to its original Bend pub, this family and employee-owned brewery opened a second pub in Portland’s Pearl District in 2008. The company’s main brewing facility is located on the banks of the Deschutes River and produces over 250,000 barrels of beer annually for distribution in 21 states and two provinces. Deschutes Brewery was named one of America’s Best Places to Work in 2013 by Outside Magazine. To find out more, visit www.DeschutesBrewery.com