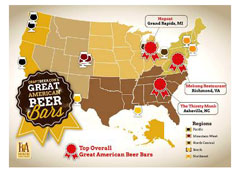 BOULDER, CO – Celebrating the passion and ardor of American craft beer lovers, CraftBeer.com—the beer lover site of the Brewers Association (BA)—released a list of the greatest American beer bars, as voted on by its readers. The list recognizes both the top three overall most popular craft beer bars in the country and the top three from each of five U.S. geographical regions.

“With more than 2,100 operating breweries in the U.S. today, CraftBeer.com’s Great American Beer Bars contest salutes some of the most amazing establishments around the country, who are showcasing the diverse, innovative and fuller flavored beers made by today’s small and independent producers,” said Julia Herz, publisher of CraftBeer.com and Craft Beer Program Director of the Brewers Association. “Being recognized as a Great American Beer Bar was no easy feat. In this inaugural year of polling, nearly 30,000 votes were cast by craft beer lovers. No matter where you reside in this country, there’s a great beer destination just around the corner. Congratulations to all the winners.

For a more detailed description of this year’s winner and semi-finalists in the Great American Beer Bar competition, visit CraftBeer.com.

CraftBeer.com asked readers to nominate their favorite craft beer bars in the country, and received over 3,300 nominations. The choices were narrowed down to the 10 most nominated bars in each of the five regions of the country. Almost 30,000 votes were cast, resulting in the top three overall and regional winners. Voting was conducted from September 13 until September 20, 2012.

The Brewers Association is the not-for-profit trade association dedicated to small and independent American brewers, their craft beers and the community of brewing enthusiasts. The Brewers Association (BA) represents more than 70 percent of the brewing industry, and its members make more than 99 percent of the beer brewed in the U.S. The BA organizes events including the World Beer Cup┬«, Great American Beer Festival┬«, Craft Brewers Conference & BrewExpo America┬«, SAVOR?: An American Craft Beer & Food Experience and American Craft Beer Week. The BA publishes The New Brewer magazine and its Brewers Publications division is the largest publisher of contemporary and relevant brewing literature for today’s craft brewers and homebrewers. Beer lovers are invited to learn more about the dynamic world of craft beer at CraftBeer.com and about homebrewing via the BA’s American Homebrewers Association. Follow us on Twitter.