Las Vegas – The National Beer Wholesalers Association (NBWA) is pleased to announce that No-Li Brewhouse of Spokane, Washington, is the recipient of the inaugural NBWA Brewer Partner of the Year Award. The award was presented today during the general session of NBWA’s 78th Annual Convention and Trade Show, taking place October 11 – 14 at Caesars Palace in Las Vegas, Nevada.

The awards recognize the brewers who do the best job in the marketplace producing great beer; building strong partnerships; providing valuable education; and offering support to their distributor customers in order to bring their beers to market. 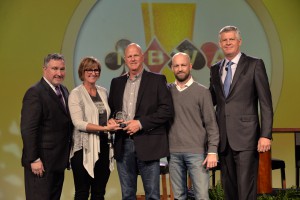 NBWA President & CEO Craig Purser said, “No–Li Brewhouse has demonstrated a remarkable ability to work closely with their distributors, working hand-in-hand in their local communities and truly treating the relationship like a partnership. The frequent collaboration, education and communication between No-Li and their distributor network makes them a deserving recipient of this inaugural award.”

No-Li Brewhouse has been in operation since 2012 in Spokane, Washington, with 20-year craft brewery veteran John Bryant.

“Perhaps there is no better example of No-Li’s close relationship with their distributors than their annual Kan Jam BEERee beer festival held at their brewhouse,” Purser continued. “At this event, No-Li invites four local distributors to pour the beers of other craft brands in their portfolio, allowing the hundreds of attendees to taste not only No-Li brews, but other brands from around the Pacific Northwest that the distributors have the opportunity to introduce to the Spokane market. Events like this, coupled with unique projects – such as working with a local distributor to brew a beer especially for the local minor league baseball team and providing sales incentives that directly benefit local charities of distributors’ choosing – demonstrate that No-Li treats their distributor partners as an extension of their brewer family.”

Straub Brewery, the recipient of the Brewer Partner Sales Execution Award, is one of the country’s oldest and most historic craft breweries, dating back to 1872 when German immigrant Peter Straub founded the company in St. Marys, Pennsylvania. Now into its fifth generation of family leadership, this American Legacy Brewery is merging the quality and pioneering vision of the past with the current craft and artisanal brewing revolution. In just the last few years, Straub has expanded its flagship offering of Straub American Lagers to include more than a dozen other seasonal craft brews.

In 2012, Straub took the bold step of restructuring their distribution in Pennsylvania, and, for the first time, assigned primary brand franchise rights to distributors across the state for their craft beers.

“The result of this effort has been a far more efficient distribution system and a true partnership between Straub Brewery and their 20 distributors across the state,” Purser said.

Dust Bowl Brewing, the recipient of the Brewer Partner Marketing Innovation Award, has experienced tremendous year-over-year growth since its opening in 2009, including a 300 percent increase in production in 2014. Their rampant growth has led to their investment in a new brewery facility, set to open in early 2016.

Purser said, “Part of the reason for their success is the innovative marketing and advertising they do in conjunction with their local distributors. From partnering with distributors on unique truck wrap designs, to increasing their social media followers 4,000 percent over four years, to collaborating on a specialty brew with local radio personalities to be featured at a local brewfest, Dust Bowl has made a major impact in a crowded beer market.”

Dust Bowl’s signature 1930 Model A truck, now repurposed as a tap truck, has become a symbol of their brand that consumers look for at festivals, fairs and events where Dust Bowl and their distributors have a presence.

“No-Li, Straub and Dust Bowl are three of the many breweries that are generating such excitement for beer around this country and providing the American consumer with more high quality choices than any other country on earth,” Purser added. “America’s beer distributors look forward to celebrating the success of each of these brands and recognizing many more innovative and collaborative brewers in the future.”

The National Beer Wholesalers Association (NBWA) represents the interests of America’s 3,300 licensed, independent beer distributor operations in every state, congressional district and media market across the country. Beer distributors are committed to ensuring alcohol is provided safely and responsibly to consumers of legal drinking age through the three-tier, state-based system of alcohol regulation and distribution. To learn more about America’s beer distributors, visit www.AmericasBeerDistributors.com. For additional updates from NBWA, follow @NBWABeer on Twitter, watch NBWA videos on www.youtube.com/NBWABeer and visit https://www.facebook.com/pages/NBWABeer.