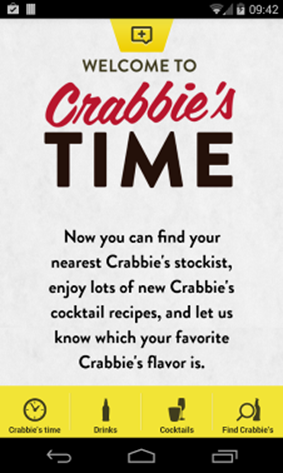 UNITED KINGDOM — In the two years since its U.S. debut, Crabbie’s Alcoholic Ginger Beer (4.8% ABV), available in both Original and Spiced Orange flavors, has become an instant hit and is currently distributed in 43 states. As the first alcoholic ginger beer available in America, the number one question asked by consumers is, “Where can I buy Crabbie’s?” To help in their quest for Crabbie’s refreshment, Crabbie’s has launched the free, Time for a Crabbie’s app, available for iPhone and Android smart phones.

Highlights of the app include:

For consumers who do not have a smart phones, Crabbie’s has also launched a ‘Find Crabbie’s’ section of its website .crabbiesgingerbeer.com. Simply enter a zip code to locate the nearest Crabbie’s Alcoholic Ginger Beer.

The Crabbie’s story dates back to 1801 in Edinburgh, Scotland and the shipping Port of Leith. After inheriting his father’s spirits business, pioneering drink merchant John Crabbie began creating new offerings to sell in his shop. He imported the best ingredients including the finest ginger from Asia and exotic herbs and spices from around the globe; elephants were traditionally used by the adventurers to explore these un-trodden grounds. More than 200 years later, Crabbie’s elephant trademark symbolizes its heritage and search for ingredients which are still used today to develop the one-of-a-kind flavor of its alcoholic ginger beer.

Crabbie’s Original is carefully crafted from a secret recipe using ginger which is cold steeped for up to six weeks and then combined with four exotic spices. The result is a refreshing, light bodied ginger beer with a spicy fresh ginger flavor, notes of citrus and a warming finish. Spiced Orange offers the same refreshing taste as the Original but with a lighter ginger profile and a zesty orange flavor. Crabbie’s is always served over ice with a slice of citrus.

Crabbie’s Original is the United Kingdom’s number one selling premium ale and has established, and is leading, the alcoholic ginger beer category in the United States. Crabbie’s is available for purchase in two formats: a four-pack of 11 ounce bottles and a 16.9 ounce bottle. Ideal for sipping, Crabbie’s can also be blended into a variety of ginger beer cocktails, such as a Dark & Crabbie and the Moscow Mule.

Crabbie’s Alcoholic Ginger Beer is available through St. Killian Importing and sales inquiries for Crabbie’s Original and Spiced Orange Alcoholic Ginger Beer should be directed to Crabbies@StKillian.com. For more information on Crabbie’s, please visit www.crabbiesgingerbeer.com and follow along on Facebook, Twitter and Instagram (@CrabbiesUSA) #icewithaslice #crabbiestime.