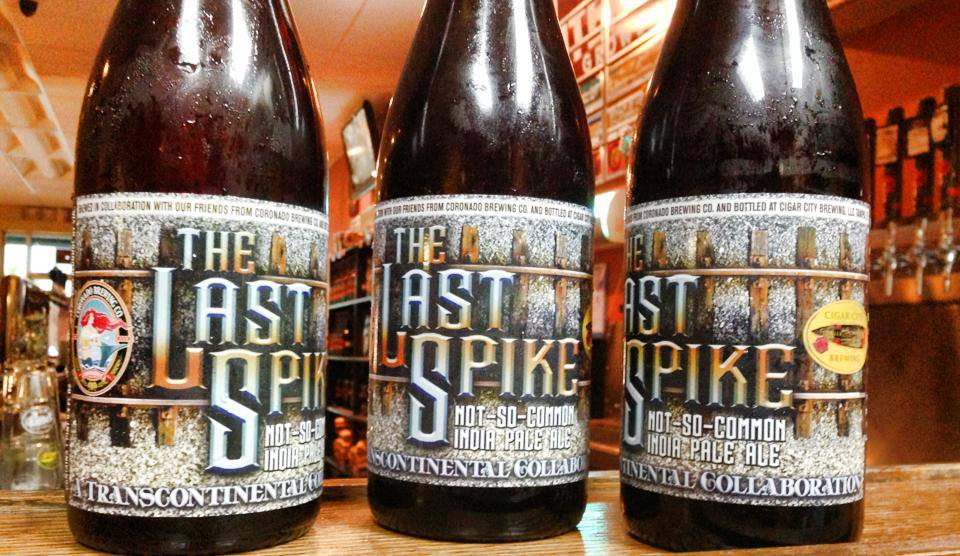 CORONADO, Calif. — The Last Spike Not-So-Common IPA is hitting the shores of Southern California as a new collaboration between San Diego fave Coronado Brewing and well-respected Cigar City Brewing out of Tampa, FL.
The result is a California Common with amped up hops making its IPA qualities shine through. The beer debuted in Florida late August and will be hitting shelves at select beer retailers in Southern California in September.
The beer represents a unique fusion of styles and balance; As a California Common, The Last Spike has more maltiness than hoppiness, yet the finish has a pronounced American-style hop aroma. When formulating the recipe, head brewer Ryan Brooks “San Diego-ized” the beer with big malts and dry-hopped it for an earthy, fresh aroma in the glass.
The Last Spike collaboration began out of a shotgunning session between Coronado Brewing co-founder Rick Chapman and head brewer Ryan Brooks. As the story goes, the Coronado Brewing crew had just finished an event during Philly Beer Week in 2011 and were camped out on a curb when their newly found friends Joey, Justin, and the crew from Cigar City rolled by.
Presented with a backpack full of canned beer, they all became fast friends and in their animated state, collaboration discussions began. The plan was further solidified at the Craft Beer Conference in DC this past spring when Rick and Justin committed to doing the first brew at Cigar City’s Tampa location, followed by Cigar City coming out to California later this year to collaborate on another beer at Coronado’s new Knoxville Street production facility in San Diego.
“We’re encouraged by the positive early feedback in seeing this first collaboration come to light,” Rick Chapman said. “Working with such a well respected brewery on the East Coast has been really fun, and I really love the final result, especially the piney notes.”
Last Spike Not-So-Common IPA specs:
Style: California Common IPA
ABV: 7.5%
Bitterness: 80 IBU
Package: 750 ml bottles
Release: West Coast, week of September 9, 2013
Malts: American 2-row, German wheat malt and British crystal malt
Hops: Nugget, Green Bullett, Pacific Gem, Pacific Jade, Topaz, Pacifica, Columbus, Pacifica, Simcoe, Citra
Where to find it:
750 ml bottles are available in limited supply at Los Angeles and Orange County beer shops. Florida residents can find it at their local Cigar City tasting room, and San Diegans can find The Last Spike at the Coronado pub and restaurant as well as at Boney’s Bayside, Bottlecraft Little Italy, Bottlecraft Downtown, Waypoint (old Linkery location), Holiday Wine Cellar, Olive Tree, Bine & Vine, Hamilton’s Tavern, Urge Gastropub, and Toronado.
About Coronado Brewing Company
In 1996, when craft beer was still a foreign term and San Diego County was home to only a handful of breweries, the Chapman brothers Ron and Rick opened a brewpub in their hometown of Coronado. The Chapmans brew abundantly hoppy West Coast-style ales, with their early success driving demand outside the brewpub. They began distributing their beers throughout the local market, and today you can find Coronado beers in 13 states across the US. As well as a pub and restaurant, the company opened a tasting room in San Diego in early 2013. For more info, visit the Coronado Brewing website.