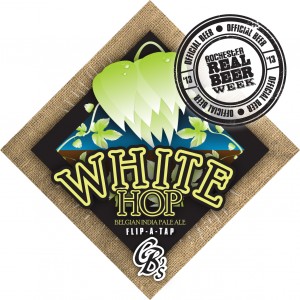 White Hop won Best Beer last at year at RRBW, and was judged the best summer brew for its clean, refreshing taste, and low alcohol content. Said one judge, “We were looking for a beer that was easy to consume during the warm summer months. White Hop won because it was very flavorful and refreshing. It is the perfect summer beer.”

As part of the award, White Hop will be available exclusively at participating bars and restaurants during RRBW 2013. A progressive launch event will take place Friday June 14th. The Tap & Mallet will host a Lunch Launch at 11:30am, at 2:00pm a White Hop Cask Launch Party will be held at The Old Toad, at 4:30pm ROCkin on the River kicks off at The Tap &Table, and at 8:00pm the last launch event will be held at Johnny’s Irish Pub.

After June 23rd, White Hop will be made available to area bars and restaurants in WNY and the Finger Lakes. The product is available on draught only and in cask at select locations.

The Rochester Real Beer Week is a week-long series of craft beer related events including tastings, food and beer pairings and dinners, socials, concerts, and craft beer launches. The event will be held June 14-23, 2013. For more information contact Chris Schultheis at chrisschultheis@tapandmallet.com or visit rochesterrealbeer.com/rochester-real-beer-week/.