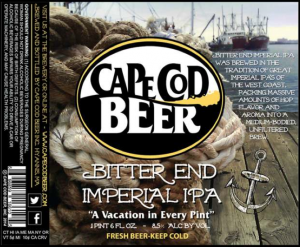 Hyannis, MA – In the year when Cape Cod Beer turns 10, they finally feel ready and able to meet the demand of a smaller package — a request they get on a daily basis from local package store owners and customers alike. Their plan is to release and distribute some of their specialty beers in 22oz bottles, also known in the industry as “bombers”, starting with their Imperial IPA which is called Bitter End. This will be followed by distributed 22 oz bottles of Stargazer Stout (3/10), Black Van Black Lager (3/17), their annual Pilsener (3/31) and a 10th Anniversary Beer (4/15) whose style and name have yet to be determined.

The Bitter End, Cape Cod Beer’s newest specialty release, is named for the nautical term “bitter end” which refers to the inboard end of the anchor rope. An Imperial IPA (India Pale Ale) by style, this beer packs massive amounts of hop flavor and aroma into a medium-bodied, unfiltered brew. Bitter End Imperial IPA was brewed in the tradition of the great Imperial IPAs of the West Coast, and packs a bit of a punch at 8.5% alcohol by volume and 90 IBUs.

Why bombers and why now? seems to be the question on people’s minds. Brewmaster Todd Marcus explains “Our expansion in 2013 has poised us to be able to make a significantly higher volume of beer — over 13,000 barrels a year (over 403,000 gallons), and bombers were the next logical step since we seem to be using all that added capacity to play with new beer styles in the off season. We picked Bitter End as the kickoff style in bombers because it is one of our most highly anticipated beers every year. Hoppy beers tend to have diehard fans, and the same is definitely is true for this beer. For right now the plan appears to be to keep our year round and seasonal beers in growlers and put the specialty beers in bombers, at least until the cans come out, and then we will consider our next steps.”

Wait? Did he say CANS? Cape Cod Beer plans to rollout 16oz cans of their Cape Cod Beach Blonde and Cape Cod Red sometime this spring. According to Business Manager Beth Marcus, they are just putting the final touches on the can artwork, and expect their first order of printed cans to arrive within about 2 months. Marcus warns “People need to know that this is an experiment for us, as we will be working with a mobile canning operation to fill our cans on site this year, in a limited quantity. This means don’t expect to find them everywhere and understand that we will be running through them quickly. If it all works out well then we will consider our next steps from there. It’s an exciting time for our small local brewery!”

About Cape Cod Beer: Cape Cod Beer is Cape Cod’s only microbrewery and has been making fresh local beer on Cape Cod since April of 2004. The brewery is located at 1336 Phinney’s Lane, where self-guided tours and beer tastings can be enjoyed during their retail hours: Monday through Friday 10am to 6pm, as well as Saturday 11am to 3pm. Guided Brewery Tours are free of charge, and given once daily at 11am. Cape Cod Beer is available in over 330 restaurants and 130 package stores from Plymouth to Provincetown. To find Cape Cod Beer, use our Beer Finder found at FIND.CapeCodBeer.com To learn more about Cape Cod Beer, please contact us at 508-790-4200 or see our website at www.CapeCodBeer.com. See Bitter End label art by local designer Evan Wadsworth on next page.