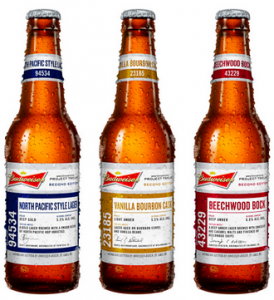 ST. LOUIS — Budweiser’s Project 12 — the brewmaster innovation platform that resulted in the introduction of Budweiser Black Crown — is back with three new beers named for the ZIP codes where the beers were brewed, beginning Oct. 28.

“Our brewmasters are the best in the business and the quality of our brewing standards is unmatched,” said Brian Perkins, vice president, Budweiser. “’Project 12’ showcases our brewmasters at the top of their game, challenging them to create new recipes that stay true to the Budweiser taste profile while also introducing unique, new flavors.”

The three small-batch Budweisers named for the ZIP code where the beer is brewed include:

On Labor Day weekend, Budweiser hosted a sampling event at the Budweiser Made in America Music Festival, giving adult concert-goers an exclusive chance to taste and provide feedback on the beers featured in the soon-to-be-released sampler pack.

“The initial response from beer drinkers has been overwhelmingly positive,” said Pete Kraemer, head brewmaster, Anheuser-Busch. “Each of the three beers has a distinct taste with a common thread. ‘Project 12’ is all about showcasing brewing creativity and credentials, and making beer drinkers happy. We are confident we’ve achieved that with the 2013 edition.”

Budweiser, an American-style lager, was introduced in 1876 when company founder Adolphus Busch set out to create the United States’ first truly national beer brand — brewed to be universally popular and transcend regional tastes. Each batch of Budweiser follows the same family recipe used by five generations of Busch family brewmasters. Budweiser is a medium-bodied, flavorful, crisp and pure beer with blended layers of premium American and European hop aromas, brewed for the perfect balance of flavor and refreshment. Budweiser is made using time-honored methods including “kraeusening” for natural carbonation and Beechwood aging, which results in unparalleled balance and character. The brand celebrates great times and has used the phrase “Grab Some Buds” in advertising since 2010.