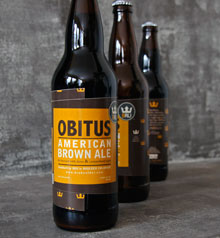 BOULDER, CO – Beer Chef / Founder Ian Clark of BRU handbuilt ales has been busy since he got his new three-barrel system up and running.

On November 8th at 7pm Centro Latin Kitchen, where Clark heads up the kitchen as Executive Chef, will host the very first BRU beer dinner. Clark will showcase both his cooking and brewing that evening. The nights sudsy highlight will include a never before tasted beer specially built for Centro called Sasquash, a roasted pumpkin porter handbuilt with molasses and spices. Culinary highlights include Scallop Crudo with crispy plantain and grapefruit-jalapeno-mint mojo and the Tamarind Braised Beef Short Ribs with crispy Isabelle farms red kuri squash fritters, grilled radicchio, and pickled cipolini onions. Guests will also be invited to take part in a discussion, led by Chef Clark, on the process and inspiration behind his culinary and zymurgical pursuits.

Our beer isn’t just a beer. It’s great beer, and a great beer isn’t just about barley, water, yeast, and hops. A great beer is about the people that make it; it is an expression of who we are. Our craft, our passion, and our love captured in a bottle (or a glass) for you to enjoy. First, it starts with writing the recipes and the thoughtful selection of the ingredients that go in them. Ingredients only a chef would know, because our brewer, or beer chef, as we like to call him, spends his nine to five life (or ten to ten in the restaurant world) in a kitchen, as the Executive Chef of a seriously delicious restaurant called Centro Latin Kitchen.

Beer Chef Ian Clark uses ingredients that aren’t unique for unique sake, but ingredients that bring out the best flavors in our beer. As any great chef knows, great recipes take patience. Our beer has the flavor only time can bring to it because we don’t believe a great beer can be made without allowing carbonation to occur naturally. That’s why we bottle and keg condition all of our beer. We also don’t filter or pasteurize it because after we’ve put in all of that good stuff, why would we take anything out?

Last, our beer is great because not only does it go beyond the typical beer experience by using the skillful ingredients and the fine-tuned techniques that only a chef would know, our beer also has our values in it; like using wind power and eco-friendly chemicals, as well as composting, recycling, and donating 1% to the planet.

So while we may list all of the ingredients on our label, we’ve left out a few; passion, joy, honesty, creativity, technique, sleepless nights, and a whole lot of love. We hope when you’re in one of the restaurants or liquor stores that carry our beer you’ll buy one, and that this time your tilt, tip, and sip is followed by the bubbling flavor of handbuilt BRU.