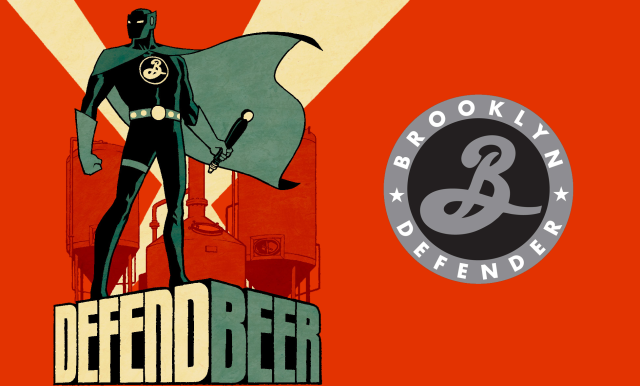 Designed to “strike fear into the heart of those who would forget the virtues of true beer” the latest addition to the Brooklyn Brewery roster has a dark malt visage and hoppy finish that protects the city from the scourge of tasteless beers. In a true nod to the comic book origins of the East Coast’s biggest entertainment celebration, acclaimed comic book artist Cliff Chiang (Wonder Woman, Batman), illustrated the beer’s artwork. The ‘Brooklyn Defender’ will be introduced at a special release party September 21 and then make its’ way to select bars and restaurants. New York Comic Con takes place October 10-13 at the Javits Center.

“New York Comic Con is a celebration of all things pop culture and what better way to celebrate than with a beer. The Brooklyn Brewery has created a true gift for fans and has lined up some events and partnerships that will bring the magic of NYCC all throughout the city,” said Lance Fensterman, global vice president ReedPOP.

Garrett Oliver, Brewmaster of Brooklyn Brewery added, “As a New York City native who grew up on 70s comics and later edited a science fiction magazine, getting to make the Brooklyn Defender for New York Comic Con is a massive honor for my inner geek.”

The ‘Brooklyn Defender’ will protect the drinkers of Gotham by allowing them to take refuge from bad beer and bad vibes at the following better beer bars:

ReedPOP is a boutique group within Reed Exhibitions which is exclusively devoted to organizing events, launching and acquiring new shows, and partnering with premium brands in the pop culture arena. ReedPOP is dedicated to producing celebrations of popular culture throughout the world that transcend ordinary events by providing unique access and dynamic personal experiences for consumers and fans. The ReedPOP portfolio includes: New York Comic Con (NYCC), Chicago Comic & Entertainment Expo (C2E2), Penny Arcade Expo (PAX) Prime & East, Star Wars Celebration, and the UFC Fan Expo. In 2013 ReedPOP has added Star Wars Celebration Europe and PAX Australia to its rapidly expanding portfolio of international events. The staff at ReedPOP is a fan based group of professionals producing shows for other fans, thus making them uniquely qualified to service those with whom they share a common passion. ReedPOP is focused on bringing its expertise and knowledge to world communities in North America, South America, Asia and Europe.

Since its founding in 1988, The Brooklyn Brewery brews flavorful beers that enrich the life, tradition and culture of the communities it serves. Its award-winning roster of year round, season and specialty products have gained the Brewery notoriety as one of the top craft beer producers in the world. Brooklyn beers are currently distributed in 25 states and 17 countries, and throughout 2011 the brewery underwent an expansion that will double overall capacity by the end of 2013. In addition to facilitating community meetings at its event space, brewery employees serve on not-for-profit boards, including the Prospect Park Alliance, the Open Space Alliance, Transportation Alternatives and the Brooklyn Historical Society. Each year the company supports many charitable and arts organizations including BAM, Brooklyn Museum and MoMA, and partners with food purveyors across the country to produce beer dinners and tasting events. The Brewery is open to the public Monday-Thursday from 5-7pm for reservation-only Small Batch tours, Friday evening for Happy Hour, and Saturdays and Sundays for Tours and Tastings.