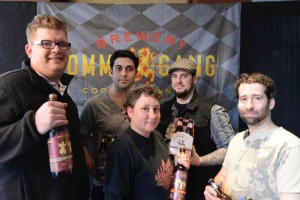 Cooperstown, NY – Brewery Ommegang will mark its return to Boston as part of its HopChef Competition on Wednesday, May 21 but first the competitors took part in a “Beer Draught” on Monday, April 14 at Meadhall in Cambridge, MA. Following a guided tasting, each chef randomly selected a style of beer that will then be used to pair with their culinary creations during the HopChef competition at The Cyclorama at The Boston Center for the Arts on May 21. Participating chefs are now starting to develop their dishes and fans have a chance to try the Ommegang beers at each of the restaurants.

WHO: Boston’s beer-forward HopChef competitors and their beer pairings are: