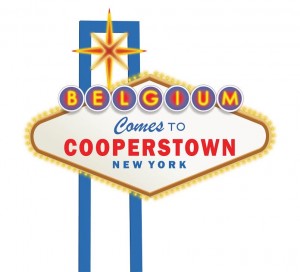 COOPERSTOWN, NY – This August, what happens in Cooperstown, stays in Cooperstown. That’s because “Belgium Comes to Cooperstown,” Brewery Ommegang’s beer, music, food, and all-things-fun fest is returning August 8 and 9 with a “Sin City” theme. The annual festival offers beer enthusiasts the opportunity to taste hard-to-find Belgian ales from the Motherland and Belgian-style ales from all over North America — and this year a chance to do so dressed in a white Elvis jumpsuit. Tickets, which typically go faster than a stack of $20s at a cold black-jack table, go on sale to the public April 1.

This year’s Las Vegas theme will pervade the festival while more than 100 breweries will be on hand pouring more than 300 unique beers for the 3,000 attendees. In addition to great beer, BCTC promises gourmet food vendors, live music, on-site camping, fireworks, and much more. Winning chefs from Ommegang’s national HopChef competition will go head to head on Saturday vying for top honors in food and beer pairing. And, for true Vegas high-rollers (well, VIP ticketholders and those lucky enough to get one of 300 limited ticket upgrades), a Game of Thrones experience will be available in recognition of Ommegang’s one-of-a-kind promotional partnership with the hit HBO series. Guests for this will receive a bottle of the soon-to-be-announced, and yet to be released fourth beer in Ommegang’s collaborative beer series, a commemorative glass and a photo opportunity on a replica of the Iron Throne from the show. Tickets for the upgrade are $25.

“We’ve been talking about a Las Vegas-theme for several years now and it only made sense because with so much great music and activities, plus a field full of beer-loving campers, BCTC is the festival that never sleeps,” said Tara Aitchison, Retails and Events Manager at Brewery Ommegang. “We are filling the weekend with several fun surprises so that just like Vegas, you never know where the night will take you but you are certain it will be fantastically memorable. For this weekend at least, the “entertainment capital of the world” isn’t a dusty desert light-show, but an idyllic and quaint lakeside village in Upstate NY.”

Festivities begin on Friday at 6pm with a five-course beer-pairing dinner for VIP ticket holders. The festival grounds open at noon on Saturday for patrons holding camping tickets. Tastings begin at 2:30 pm for VIP ticket holders and 3 pm for general admission. Tastings end at 7 pm. There will be live music from 3 pm until midnight. On Sunday morning, breakfast will be served from 8 am until noon. The brewery will be closed to the publicon Friday and Saturday, August 8 and 9, but will reopen for regular service on Sunday, August 10.

VIP tickets cost $250 and include the five-course beer pairing dinner, two nights of camping on the brewery grounds, and additional access to the beer tasting on Saturday afternoon. General admission tickets for Saturday’s tasting event cost $90 and general admission with camping on Saturday night costs $110. Guests may add the Game of Thrones package to their GA and GA+camping tickets for $25. The Game of Thronesexperience is included in the costs of a VIP ticket.

Tickets go on sale April 1 at noon at Ommegang.com and Etix.com and are available until they sell out. Please note that VIP tickets have sold out in under a minute for the last three years and all tickets sell out within a day of the event going on sale. For more information, email events@ommegang.com or call (607) 544-1800 ext. 813.

Brewery Ommegang opened in 1997 to craft-brew fine Belgian-style ales. The brewery creates six ales year-round, as well as an extensive and imaginative range of seasonal and specialty ales. The beers have won a national following by connoisseurs of fine beer and are distributed in 43 states and internationally. Ommegang is located on a 136-acre farmstead in Cooperstown, New York, USA and offers free daily tours and inexpensive tastings as well as a 100-seat café, a well-stocked brewery store, and an annual calendar of public events. Ommegang is open every day of the year except Thanksgiving Day, Christmas Day, and New Year’s Day. For more information, please contact info@ommegang.com, call 1-800-544-1809, or visit www.ommegang.com. Ommegang is a member of the Duvel family of fine beers. Follow Ommegang on Twitter: @BreweryOmmegang , Facebook.com/Ommegang, Instagram: @BreweryOmmegang